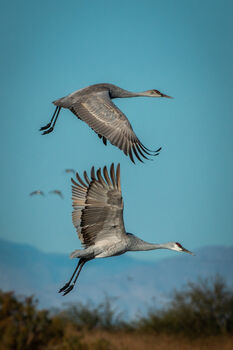 The roar of 100,000 birds taking flight all at once was both startling and intense.

The quiet of the late fall desert morning was shattered as the visiting winter flocks of sandhill cranes and snow geese lifted off from the agricultural fields along the southern edge of Salton Sea.

It's an impressive sight and sound and birders are excited at the annual arrival of these beautiful birds.

From now until late winter, the 38,000 acres of the Sonny Bono Salton Sea National Wildlife Refuge will be home to several migrating species, including the huge sandhill cranes.

Only a short drive east of Borrego Springs, the refuge offers nature lovers incredible views with an impressive array of both native bird species and winter migratory visitors.

It might seem odd that these wetland birds come to the desert for the winter, but the Salton Sea provides a unique mix of marine, freshwater, wetland and agricultural habitats. The refuge is recognized world-wide as a significant location for migrating birds.

More than 200 species of birds can be found here during the winter months, and over 400 species have been throughout the year. Visitors can also expect to see burrowing owls, Gambel's quail, Ross's and snow geese, cattle egrets, white-faced ibis, American kestrels, and several species of plovers.

The southern end of Salton Sea is a birders paradise, but also offers a chance for encounters with coyotes, bobcats, raccoons, kangaroo rats and the desert pocket mouse.

The best place to see the huge flocks of cranes and geese is in Unit 1 of the refuge, accessible from south Highway 86 onto Bannister Road, then north on Vendel Road.

There is also a visitor center located at 906 W. Sinclair Rd., Calipatria, where visitors can watch from elevated viewing platforms.