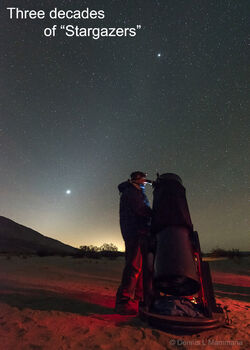 It's hard to believe, but it will be 30 years on Aug. 19 since I published my first "Stargazers" column.

It's hard to believe, but it will be 30 years on Aug. 19 since I published my first "Stargazers" column.

Over those years, we've seen eclipses darken the land, planets converge in the sky or transit across the sun, meteor showers rain from above, and some of the most spectacular comets in history drift mysteriously across the silent heavens.

Some of my most memorable cosmic events of the past three decades have been standing every year in the frozen outback of Alaska as the colorful curtains of the aurora borealis dance magically among the glistening stars, watching a total Solar eclipse over the ancient Cambodian temple of Angkor Wat as Buddhist monks beat drums to scare away the sun-eating dragon, and staring slack-jawed at the iridescent blue-green tail of Comet Hyakutake arching more than halfway across the sky!

Adding to those memories, just a few weeks ago I watched as NASA unveiled the first breathtaking images produced by the new James Webb Space Telescope, an instrument that has already begun to revolutionize the science of astronomy.

Of course, it's not just these super spectacular celestial events that capture our imaginations. Sometimes it's the simplest and most common. For me, just gazing quietly into the stars of summertime is enough to evoke fond memories of childhood, when my fascination with the universe was just beginning to bloom.

Quite a lot has occurred in the heavens since 1992, and I'm still amused to recall the column's humble beginnings with the San Diego Union-Tribune. While considering whether to publish "Stargazers," my editor asked if I honestly thought there would be enough happening up there to sustain a weekly column.

Three decades later I think we know the answer. In that time, I've submitted more than three-quarters of a million words along with more than 1,500 illustrations, for which my heartfelt gratitude must go to all the editors who have cheerfully dealt with every single one of them – and me!

"Stargazers" has long since become syndicated through Creators Syndicate, and readers can now follow me through free email subscriptions and on Facebook, peer deeply into the heavens with my popular Borrego Night Sky Tours or join me for my annual Alaska aurora borealis adventures – none of which I could have even imagined back in the early days of this column.

Since that first article 30 years ago we've traveled together more than 17.5 billion miles around the sun, and our star has carried us nearly 150 billion miles in our journey around the Milky Way's center. And youngsters who enjoyed my first columns now have families of their own and are well on their way to sharing the amazing night sky with grandchildren.

I hope that, during our time together, my words have inspired you to appreciate the nighttime sky and to view the universe, the world and each other a bit differently, and that they have helped you to create some wonderful memories.

I eagerly look forward to sharing with you another three decades – and more – of celestial discovery, and I hope that you'll continue along for what promises to be an even more exciting and thrill-packed cosmic journey!