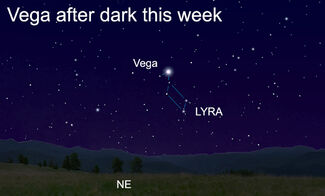 Vega is the most brilliant star in the tiny constellation of Lyra, the harp, and it's one of the three bright stars of the grouping known as the Summer Triangle.

Of all the books I've read during my nearly six decades of stargazing – and there have been a lot – my favorite isn't a technical tome like you might imagine. It's actually the inspirational and romantic autobiography of the late amateur astronomer and comet-discoverer extraordinaire Leslie Peltier.

In this marvelous 1985 book "Starlight Nights," Peltier writes ever-so-eloquently of his passion for stargazing and how, as a wide-eyed child one springtime evening long ago, he read about – and met – his very first star: Vega.

He describes his encounter like this: "Vega, at that very hour in the month of May, would be rising in the northeastern sky. I took the open book outside, walked around to the east side of the house, glanced once more at the diagram by the light that came through the east window of the kitchen, looked up toward the northeast and there, just above the plum tree blooming by the well, was Vega. And there she had been all the springtimes of my life, circling around the pole with her five attendant stars, fairly begging for attention, and I had never seen her. "Now I knew a star!"

That same star that fired young Peltier's imagination is still in the heavens, waiting to inspire us too. This week we can see it glistening low in our northeastern sky after dark, just like Peltier discovered. All we have to do is go outdoors and look.

Vega is the most brilliant star in the tiny constellation of Lyra, the harp, and it's one of the three bright stars of the grouping known as the Summer Triangle.

Even the most casual stargazer will notice Vega's flickering and sparkling against the dark sky. This dramatic twinkling is due not to the star itself but to the turbulent air through which its light must travel on its way to our eyes.

Gaze at Vega and you'll be looking roughly in the direction that our sun and our entire Solar system is racing at about 12 miles per second. No need to worry about a collision, though. Vega lies some 25 light years away – about 150 trillion miles – so nearly 4,000 centuries will pass during our journey.

This brilliant white star is more than twice as large and massive – and produces some 40 times more luminosity – than our sun. As a result, it will exhaust its fuel in only one-tenth the time, making its expected life span only about one billion years.

While it now appears rising in the northeast, Vega will one day lie in our north. In fact, one day it will replace Polaris as our North Star. This will occur because our Earth wobbles like a tilted spinning top with a period of about 25,800 years.

Because of this effect, the star Vega will be located less than six degrees from the north celestial pole sometime between A.D 13,000 and 14,000.

Vega is such an amazing and beautiful star in so many ways. If you've found one excuse after another to put off getting outdoors to learn the stars, take a page out of Peltier's wonderful book. Step outside tonight and make friends with Vega!