"Why Are Strangers Trucking Our Water?" 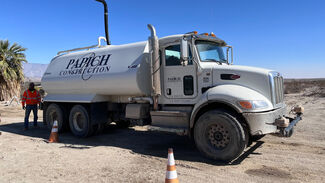 Water trucks drawing water from a Borrego Water District (BWD) well in the Dry Gulch area drew the attention of residents wondering why trucks not belonging to the BWD were regularly stopping to draw water?

Concerns brought to the Borrego Sun ranged from, "Why is someone taking our water when we're running out?" and "Why is the Water District giving away water?" to complaints about the District's high-water rates.

It all began in 2015, when Jim Whelan gave a presentation to the BWD Board on a proposed Ocotillo Wells Solar Farm. Developed by the Gildred Company, the project, located in a remote area of Ocotillo Wells, and surrounded by public lands, had been approved by the County. The developer was asking for a one-time purchase of 40-acre feet (12.86 million gallons of water) from BWD to be used during construction. In return, the developer planned to fallow eight acres of citrus, per the County's mitigation policy; and the property owner claimed, he would be donating 300 plus acres of land to the State Park.

Jerry Rolwing, the water district's general manager at the time, stated he supported the project. He pointed out additional benefits including "donations to local schools and revenue for BWD." Former BWD Board Director Lyle Brecht expressed concern whether the acreage to be fallowed was sufficient and Whalen indicated flexibility. The deal closed with a $25,000 non-refundable deposit, and a signed contract with further details to be finalized. Extra revenues to the district, although discussed, but not stipulated at this point, were no doubt seductive, since one of the goals under then BWD President, Beth Hart was to get the District on sound financial footing.

The Solar project lay dormant until 2019, when the developer resurfaced, ready to begin construction, and finalize contract details. Rolwing was gone and the BWD had a new Board of Directors with Kathy Dice as president; Lyle Brecht, vice president; Dave Duncan, secretary/treasurer, members Raymond Delahay, and Diane Johnson.

"The Ocotillo Wells Solar project has been in the works for years. A Board of Directors before me made the agreement to sell the project water for construction, and accepted a deposit," Board President Kathy Dice said. "Note this was also before SGMA and the Groundwater Management Plan for the Borrego Basin, but we are obligated to the already signed contract."

In the interim, between 2015 and 2019, the County's mitigation of fallowing eight acres of citrus, donations to schools, and the contribution of the land to the State Park disappeared from discussions.

When asked, BWD General Manager Geoff Poole admitted, he was not familiar with how the original agreement went down, or what happened to previous promises. But when asked by the Board to come back with an agreement to sell "the Gildred Company approximately 40 acre-feet of water for the Solar project in Ocotillo Wells," he did so.

Poole made a number of changes, including changing the agreement to provide for a non-refundable deposit of money, rather than water credits, and the amount was changed from $25,000 to $28,000. All improvements to water tank 900 for the water transfer went to the District. A water meter was to be installed at Gildred's cost, and BWD would bill monthly. The deal was one time only, and a cap was set at 40-acre feet of water.

Dice reminded the Gildred Company, now Ocotillo Solar, LLC, that they still needed to make environmental mitigations by transferring 300 plus acres. She suggested donating the land to Anza-Borrego Desert State Park, or the Bureau of Reclamation, both of which are adjacent to the Solar property.

To date, nothing has been settled.

To some residents 40-acre feet seemed like a lot of water that would be better reserved for the community. One resident stated, "He couldn't drink money" and "preferred that no amount, no matter how small, be given to others outside Borrego, regardless of the revenue benefit to the District."

Poole responded that "40 acre-feet isn't a lot of water. In fact, if you divide it into the 1500 acre-feet the District is currently pumping, it's only 2.6 percent of the current annual district-wide water use."

The funds paid to BWD for the project's construction goes into a non-water rate-payer revenue fund.

"The money in this fund gives us discretion to assist with other projects dedicated to the well-being of the community. We have been able to invest in local projects that have a nexus to community values. Our most recent outreach was to help fund the Interpretive Host program at Borrego Springs High School," Dice said.

"Additionally, this fund allowed us to help pay for air quality monitoring in the Borrego Basin. We hope the data from the weather stations will assist us with farm fallowing decisions and even climate change modeling."

Improved air-quality monitoring capacity will more adequately measure sand, dust and chemical residues, corrupting the air and endangering public health, where citrus groves and other lands have been fallowed.

"The water going to the Ocotillo Wells' project does not affect water rates to our customers - who pay under $4 per unit of water, versus the $10 per unit the developers are paying," Dice concluded.

Hanging in the air, like the last rotten apple on the tree, one resident's anger at what he believed to be unacceptably high water rates, remained unassuaged. The resident, who wished to remain anonymous, stated that BWD rates are three times higher than his water rates in Escondido. Poole suggested he take another look at the rates.

Contrasting a typical summer time consumption of 20 units (748 gal.) monthly between Escondido with BWD would look like this:

One myth that begs exploding is the relationship between water and rates. Some believed, the more valuable the water, as in a shortage due to Drought, or the Borrego Critically Overcharged Sub-Basin, the higher the rates.

"Rates, as required by state Law 218, are based on the actual direct costs of supplying water, from infrastructure, to sewage treatment and transporting," Poole pointed out.

Many of the issues that currently concern rate payers were publicly discussed and vetted at that time, maybe not to everyone's satisfaction, but transparency and community participation did happen.

Final Fact: In October 2021, the BWD Board reduced the Tier-1 rate.

Note: Lyle Brecht resigned in November and was replaced by Paul Rosenbloom. Elections for Directors will be held in the General Election 2022.