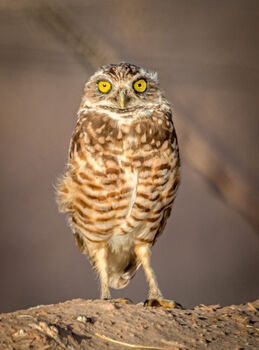 The 37th annual Audubon Christmas Bird Count is in the books, as more than 70 volunteer birders spread out around Borrego Springs Dec. 19 to conduct the yearly bird census.

Counters recorded 102 species, compared to 111 last year. Total bird numbers of birds counted have yet to be compiled but will likely be close to more than 10,000.

The most notable observations included a swamp sparrow at Borrego Springs Resort and a burrowing owl, a species that is declining significantly in San Diego.

The swamp sparrow is a secretive bird and the sighting during the bird count was only the third time it has been recorded in Anza-Borrego.

Additionally, sightings included an out-of-season barn swallow, a canvasback duck, a Scott's oriole, and two LeConte's Thrashers in the SD County Dune Preserve that was set aside as habitat for them in Borrego Valley.

The 76 volunteer counters logged 105 hours on foot, 28 hours by vehicle and seven hours observing at bird feeders. They also spent 1.5 hours in the dark looking for owls, walked 78 miles and drove nearly 200 miles.

"Overall, we are very pleased to have 76 volunteers assist with this longtime Borrego Valley tradition of the National Audubon Christmas Bird Count," Jorgensen said. "This count helps provide a long-term profile of the health of bird species in our region and the trends of bird numbers over time and geographical distribution."

The Christmas Bird Count is a tradition that began 122 years ago when 27 birders headed out on Christmas Day after their holiday meal.

Since then, the annual count has become a nation-wide event and involved more than 80,000 counters at 3,000-plus locations throughout North America during the count period that extends from mid-December to early January.

Counts are conducted in areas defined by a 15-mile circle. In addition to the Borrego Circle, there are counts in Salton Sea, Lake Henshaw, Escondido, Rancho Santa Fe, Oceanside, and San Diego.

The Borrego Circle is centered on De Anza Country Club and most counters begin at dawn and scatter to all areas within the circle to conduct the census.

Some of those areas are right in Borrego, like the Roadrunner Club, De Anza Country Club and Borrego Springs Resort, but also include more remote areas like a hike to upper Palm Canyon or by four-wheel drive into Coyote Canyon.

Additional locations include the San Ysidro Mountains at the eastern fringe of the Los Coyotes Indian Reservation, Borrego Sink, upper desert locations such as Culp Valley, along with local residential areas and agricultural fields.

Counters are on the lookout for local resident birds in addition to seasonal migrants or rare visitors who may be passing through.

Some of the most common species spotted include house finch, white-crowned sparrows, common ravens, phainopepla, California quail, and white-wined dove.

Final count numbers are provided to interested groups and are posted on the UCI, ABF, and Anza-Borrego Desert State Park web sites.

Following the count, birders gathered at the Steele/Burnand Desert Research Center to enjoy a traditional chili lunch and turn in their census numbers. Observing COVID precautions, the lunch was conducted outdoors.

Total count results take time to compile, because some are sent in by e-mail as participants return home.