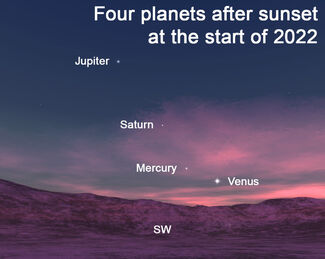 Four planets appear in the sky at sunset.

Like many people, I enjoy the beginning of a new year. It's always brimming with hope and optimism, as well as endless lists of resolutions we swear we're going to attack, but which usually survive a few days at most.

There is one resolution, however, that can easily carry us through the entire year: keeping watch on the heavens. And believe me, 2022 will be quite good for sky watchers!

Perhaps the most exciting events of the year will be eclipses. While the only Solar eclipses of the year do not appear in North America, we will enjoy a couple of lunar eclipses. The first will be a total eclipse of the moon on the night of May 15/16, and viewers in the eastern half of North America will be in prime position for that one. A second occurs during the early morning hours of Nov. 8, and this one will favor those in the western half of our continent.

For the first few days of the year, we'll see the brilliant planet Venus descending lower in the southwest at dusk, with much fainter Mercury, Saturn and Jupiter not far behind. By mid-February, all will vanish into the glare of the setting sun, and our early evening sky will be devoid of planets for a few months. Mercury will return to the dusk sky in April, August and December.

Once late summer arrives, however, our Solar system neighbors will return. On Aug. 14, the ringed planet Saturn will reach its opposition point (and its closest to Earth) when it will rise at sunset and shine all night long. On Sept. 26, the giant planet Jupiter will reach its opposition point, and these two gas giants will grace our evening sky throughout the autumn months.

By December, a third planet will appear in the east: Mars the red planet will reach its opposition point on Dec. 8, when it will outshine even the most brilliant stars of winter.

Meteor shower fans will be disappointed this year, though. In 2022, both the prolific Perseid meteor shower of Aug. 12/13 and the Geminid meteor shower of Dec. 13/14 will reach their peaks on nights with bright moonlight. This, of course, will blot out many of the fainter meteors. The good news is that the Geminids occur during the last quarter moon, and these meteors are so bright that many will appear anyway.

Finally, as the sun returns from a several-year slumber known as Solar minimum, the magical and colorful aurora borealis – the northern lights – will be dancing across the Arctic skies. If we're lucky, they may even descend far enough south for stargazers in the Lower 48 to catch a rare glimpse or two during the year.

To join me for some of these remarkable celestial events – or at least follow them from your own home – please visit my website and Facebook page to keep up with celestial happenings. I hope you'll feel free to drop me a note if you have any questions.

In the meantime, I wish all of my readers a happy and healthy 2022 and invite you to enjoy another exhilarating year of celestial wonder!