RAAM, RAW: It's About the Climbs 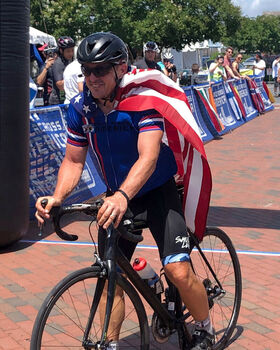 Erik Newsholme (USA) wins the Solo Men's division and becomes the first American since Allen Larsen in 2003 to win the men's race.

It is called the world's toughest cycling race because, at once, it is logistically difficult for riders and crew, physically exhausting for the riders, and mentally challenging for all.

This year's 3,037-mile Race Across America (RAAM), and its 928-mile sibling, Race Across the West (RAW), was not for the faint-hearted. Especially across our broad desert landscape where temperatures reached 120º F on RAAM race day; record-high temps were recorded throughout the course. Yet it is not the flat sections that pose the greatest challenges to both physical fitness and race strategy, rather the lengthy and often grueling, leg-cramping climbs up mountain grades that separate the wheat from the chaff.

Three major climbs (up the Pala Grade near Oceanside plus two in the Rocky Mountains) and one minor (across the Appalachians) encompass fully one-third of the RAAM course, ending in Annapolis, Maryland. Also, about three-quarters of the 928-mile RAM course involves climbs, ending in Durango, Colorado. The races can and are won or lost on those climbs. (Graphic 1)

In our last issue (June 24), we presented the highlights of the RAW competition, where the 2-person "Speed Cowboys" team of Shane Trotter and Tyler Pearce left the field in the dust up the Pala Grade prior to the first timing station in Borrego, and they never looked back. In addition to achieving their 1st goal of finishing the race, they also rewrote the record book for every 2-person age category, with a blistering average speed of 20-mph over the 928-mile course. (Important note: Courses of different lengths in RAAM require a better rider/team comparison than actual finish times, namely average speed overall and between 54 Timing Stations).

And finally, the Cowboys shattered RAW's 2-person, 48-hour barrier with a time of 1-day, 22-hr, 40-min, and by more than three hours. Comparing the Speed Cowboys finishing time with that of 4-person records, they beat all of them (including average speed over the entire course) except one – the 2016 4-person record of 1-day, 16-hr, 45-min by Monster Media Ultra Racing (USA); the Monsters achieved a whopping average speed of 22.78-mph!

In the solo female under-50 category, Heather Poskevich turned in the fastest time of 3-days, 2-hrs, 31-min with an average speed of 12.46-mph over the entire 928-mile course. Poskevich even bested Andres Rodriguez in his male under-50 solo category time of 3-days, 2-hrs, 59-mins. "By only 28 minutes" you say. In fact, Poskevich rode the last leg of her race (between the final two Timing Stations) and into Durango about 2-mph faster than Rodriguez, mostly uphill! Poskevich was also faster to the finish line and with a faster average speed than four out of the five solo male riders 50-59. Bragging rights are definitely in order for Poskevich, in further consideration that four of the five male entries in Rodriguez' category did not finish the race.

For the RAW 2-4-Mixed team riders, 9 of 13 teams finished the trek to Durango, with the aforementioned Space Cowboys blowing away the average overall times and breaking the 48-hour barrier in Durango. Once again, it should be remembered that three-quarters of the RAW event consists of onerous hill climbs.

For riders in the 3,000-mile RAAM solos, only one of the two female entries – Leah Goldstein (Female 50-59) – finished and won her race, and the first female to win Solo RAAM overall. And only two out of 10 solo male riders (Erik Newsholme and Michael Davies-Hughes) finished the RAAM course.

Newsholme became the first American since Allen Larsen in 2003 to win the Solo's Men Division.

To assess cyclist climbing ability in a bit more detail, let's take as but one example a finish time in Annapolis with a difference of about two hours between solo male finishers Newsholme and Davies-Hughes in the age 50-59 category.

The highest elevation in the RAAM event (about 11,000 feet) occurs between Timing Stations #16-17 (Pagosa Springs to North Fork, CO at the Continental Divide). Newsholme completed the 44-mile run between Timing Stations with an average speed of 10.36-mph, while Davies-Hughes did it at an average speed of 9.86-mph, a difference of 0.5-mph. It resulted in a time difference of only five minutes over those 44 miles. Again with the "only." In a long race with both mountains and flats, however, the rider who prevails not only toughs it out on the hill climbs but also possesses the discipline and endurance to have applied due pressure on his opponents along the flats.

Another comparison of RAAM winners, focusing on their hill climbing abilities, is the cross-country duel between the 8-person teams of Team Zoe International (Bib #806) and Team Oceanside (Bib #808). See Graphic 3.

Once again, however, over a 3,000-mile course where fully one-third of the race is in the mountains, Team Zoe led Team Oceanside, beginning near the Salton Sea, continuing up into the Rockies, and they never relinquished the lead the entire race, including the flats across the midwest.

Team Zoe International finished the RAAM ahead of Team Oceanside by almost four and a half hours. This included two 1-hr time penalties for Team Oceanside by 1) obstructing traffic, and 2) exchanging riders in a traffic lane; elimination of the penalties would not have been enough to overcome their 2nd Place finish.

Team Zoe missed going under the 6-day time barrier by a mere 27 minutes, but that would have been merely a nice add-on to their victory. The winning Zoe International team members Allan, Allen, Jonathan, and Elmer Fisher; Samuel and Matt Lapp; Nathan Eakin, and Brad Ortenzi, all deserve great credit for their racing endurance and race strategy. In summary, small local differences do add up over long distances.

In addition to the Space Cowboys setting new records, there was also one other RAAM record worthy of mention. The Opportunists (4-person mixed, 60-69) obliterated the 2017 record by more than 11 hours. So, kudos to both the support crew and cycling team members Chris Huffman, Kathy Petrillo, Matt Shippee, and Michel Chabot for their combined efforts.