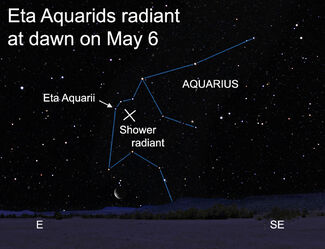 The Eta Aquarid meteor shower occurs on May 6.

Halley's Comet hasn't appeared in our sky for a quarter-century, but during the pre-dawn hours of May 6, stargazers will have a chance to see pieces of this famous celestial visitor.

On that morning, sky watchers far from city lights will be treated to what astronomers know as the Eta Aquarid meteor shower.

Meteors, or shooting stars, are specks of interplanetary dust hardly larger than a sand grain that encounter the Earth at speeds of tens of miles per second. As one of these slams into our atmosphere, it heats up and causes the neighboring atmospheric gases to glow, and it's this fiery demise that we see as a meteor.

The meteors of the Eta Aquarid shower fell off the most famous of all comets: Halley's Comet, which most recently passed the Earth in 1986. They tend to collide with our atmosphere almost head-on at speeds up to 42 miles per second, and the brighter ones can often show a yellowish color. These meteors will appear all around the sky, but you can tell if one is part of the Eta Aquarid shower by tracing its path backward. If it appears to come from the direction of Aquarius, low in the east-southeastern sky before dawn, it is almost certainly associated with this shower. If it doesn't, it's what astronomers call a "sporadic" meteor.

Though historical records suggest that stargazers have seen the Eta Aquarids since about 74 B.C., the shower was not officially "discovered" until 1870 by Lt. Col. George Lyon Tupman.

To view the celestial show, head away from city lights, where the sky is dark and clear. Under ideal conditions, stargazers may see as many as 40 or 50 meteors, or falling stars, every hour, coming from the eastern sky. The best times for viewing will be between midnight and the first light of dawn. Though the moon will appear in a crescent phase on the morning of May 6, it won't reduce the visibility significantly.

The best part of a meteor shower is that all you need to view it is your eyes, a lawn chair or sleeping bag, and some warm clothing. No binoculars or telescopes are required to view the shower; they would produce much too narrow a field of view to see the all-sky show, though you may wish to have binoculars handy to check out any persistent smoke trails left behind by the brightest of the meteors.

Now, if you're holding out to see Halley's Comet itself – the comet from which these remnants originate – you'll need to be patient. It won't return to our Solar system neighborhood until 2061, but I'm excited about seeing it again.

I'll be celebrating my 110th birthday that year, and while most people at that age are happy just to see the sun rise, I'm much too determined to let a little thing like old age destroy my plans. In August 2061, I plan to be out with a telescope and camera to record what should be Halley's best pass in many centuries.

In the meantime, however, we can all enjoy watching pieces of Halley fall from our sky on Thursday morning.