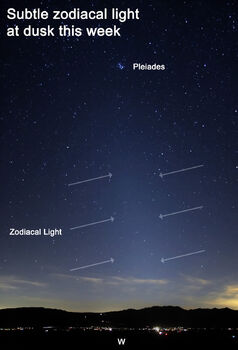 The zodiacal light appears best only after the end of evening twilight or before the onset of morning twilight.

Stargazers who spend time in rural locations get to experience celestial sights that are invisible, and sometimes completely unknown, to those living near the bright lights of a city.

For example, the number of stars scattered across the clear, dark skies over the mountains or deserts is easily in the thousands. How many folks regularly get to enjoy such a sight? Then there's the Milky Way, the starry band of light that marks the central plane of our galaxy; and the distant star clusters, nebulae and galaxies known to astronomers as "deep-sky objects." Many of these are visible to the naked eye as hazy patches of light when viewing far from the devastating effects of light pollution.

All are visible on most nights of the year from rural locations, but there's another remarkable phenomenon – one that can be seen during late dusk only during late winter and early spring; it's known simply as the zodiacal light.

This mysterious glow was described nearly a millennium ago by the Persian poet Omar Khayyam in his famous book "The Rubaiyat." Today we know it is produced when sunlight is scattered from dust particles spread along the plane of our Solar system. Most of these are only about four-hundredths of an inch across and are separated by an average distance of five miles, and they are continually generated by passing comets or by collisions among asteroids.

Because it is generally brightest in the direction of the sun, the zodiacal light appears best only after the end of evening twilight or before the onset of morning twilight, and then only when the plane of our Solar system (the ecliptic) forms a steep angle with the horizon. These conditions, along with an absence of moonlight, occur after evening twilight for only a few weeks during late winter and early spring, and before morning twilight in late summer and early autumn.

To see the zodiacal light this week, you must first head to a dark rural site far from the blazing lights of cities and suburbs There you'll need a clear and dark sky to your west, with a fairly low horizon. Begin looking about an hour after sunset for a large, faint and softly glowing pyramid with its wide base near the western horizon and its tapered end near the tiny Pleiades star cluster.

In its brightest parts, the zodiacal light can exceed the brightness of the winter Milky Way, which now appears to flow mostly from southwest to northwest across the heavens. You may find it easier to spot the zodiacal light about an hour or so after sunset, but much later than that, it will simply disappear into the darkness.

Stargazers who have never seen this phenomenon expect a much smaller or brighter glow. Often it appears to ascend to one-third or even halfway up in the western sky. Its base typically appears to be some 15 degrees wide, and the cone tapers to only about five degrees wide at the top.

Good luck with this one. You'll definitely find this to be a challenge, but if you see it, you'll be talking about it for many years to come!