NBC 7 Uncovers Goodness That is Borrego 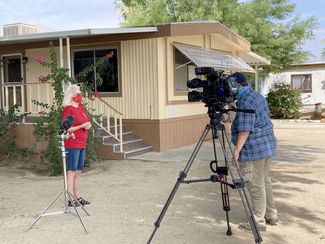 On Aug. 13, NBC 7 Photojournalist Scott Baird came to our village to cover what we all do best – take care of our people and keep our community safe during this time of COVID-19. He spent the day from 10:30 a.m. – 4:30 p.m. filming and interviewing a multitude of local folks involved with our efforts and as he filmed his way through the day, Scott soon came to the realization that Borrego Springs is truly a unique place with some incredible people.

The condensed version of his six-hour day is scheduled to air on KUSI Channel 7 later this week. The exact day and time had not been announced as the paper was going to press.

What began as simply an inquisitive call from NBC 7 Lead Assignment Editor, Lindsay Hood, to the Borrego Ministers' Association (BMA), grew into a conversation with BMA President, Reverend Laura Brecht and members, Diane Johnson and Martha Deichler. Could Lindsay even imagine what she was getting into when she followed up on a rumor she had heard that even little Borrego Springs had a food bank? One food bank a month? Heck, no, we have nine different food distributions a month!

As conversations between Lindsay and BMA members unfolded, the story of Borrego Springs' outreach during COVID-19 went deeper and it became obvious that a photojournalist would need to spend the entire day here to capture the depth and richness of this community's support of its people, many of whom are unemployed and struggling mightily at this time. This is the essence of who we are.

Complete with huge camera on his shoulder, big fluffy microphone in hand and interview questions neatly organized on his phone, Photojournalist Scott set about capturing this essence. He patiently made his way through a schedule that included 10 stops and over 11 interviews. Beginning with Santiago Estates, Scott filmed and interviewed folks, including Cathy Paredes (BSUSD's Food Service Director), who had come to pick up meals from the school district's daily food drop-off. Next stop was a Spanish interaction with local Luis Sanchez who is working with the BMA to identify mobile homes in need of swamp coolers in order to keep electricity costs down.

As the temperature swelled to over 100ºF, we headed to the cool rooms in ABDNHA where Scott captured on film a program offered to individuals needing assistance with filing for unemployment due to language issues or a lack of Internet. Urmi Ray and Blanca Rodarte worked diligently with a husband and wife who clearly appreciated this support.

The remainder of the day included interviews with folks about the valuable work of the BMA in assisting unemployed families with rent, utilities, food and gas. Betsy Knaak spoke about the recently formed COVID-19 Task Force and its work with keeping the community safe and informed. Very impressive stuff!

A stop by the Center Market found owner Mitzi Poulin handing over hundreds of dollars worth of food certificates to BMA Treasurer Mike Himmerich, for distribution to families and individuals suffering from lack of employment and food insecurity.

The day came to a joyous end with a visit to a group of volunteers enthusiastically packing up food – chilies, tomatoes, rice, beans, onions, eggs and more – at the Mall, under the direction of philanthropists, Tom Fredericks and Jim Wermers. The generosity of this group of volunteers and the work they do weekly is truly impressive. Even more moving was the long line of cars snaking its way around the Mall at 4 p.m. to pick up their box of fresh food. In one last gesture of generosity, Photojournalist Scott captured BMA Mike Himmerich donating a check for $2,000 to Tom and Jim for their food bank program.

It is a four hour round-trip between Borrego Springs and San Diego. If someone is going to make that trek, then it should be worth their while. We made sure it was!

Note: For information on the other food banks, please contact Martha at mdeichler@bsusd.net