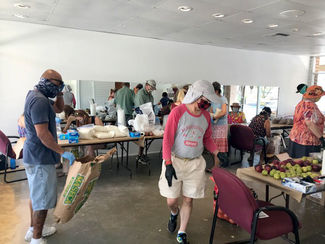 They hoped for 25 people; over 50 showed up. They expected a simple thank you; they received virtual hugs from incredibly grateful people. They simply wanted to offer food to families whose employment hours had been eliminated or reduced; they received overwhelming personal joy and satisfaction proving that "it is better to give than to receive."

Wearing masks and staying a safe 6' apart, friends and volunteers of the Fredericks and Wermers came together to bag up beans, rice and masa. They boxed tomatoes, fruit, chilies, hamburger and tortillas. Two hours later, the cars began rolling up to the Mall. Word had gotten out and dozens of needy families began to show up for much needed nutrition for their families.

The pandemic has definitely left many folks with no work or with reduced hours of employment. Thomas and Jeanne Fredericks realized this as they were forced to reduce hours of employment for their 10 workers at their local construction business. After conferring with their employees, the decision was made to reduce everyone's hours instead of laying off some and keeping some full-time. Such a magnanimous decision on the part of the workers!

Using personal donations, as well as those from locals, Jim and Anne Wermers along with Thomas and Jeanne Fredericks purchased food at cost through Rodger at the Desert Pantry, and donated it to our Borrego families experiencing food insecurity. They started with their own 10 workers and their families, then the numbers grew as everyone knows someone who has lost work and is suffering financially.

Borrego Springs does offer five Food Banks every month and although this free donation of food is greatly appreciated, it is what the San Diego Food Bank is able to purchase or receive from farmers and grocers. Often this food is surplus and includes items unfamiliar to our local palates. The Fredericks and Wermers actually asked folks what kinds of food they prefer and then they delivered.

So easy and so sensible. Yes, and a bit costly. The Fredericks and Wermers would like to continue this highly successful endeavor weekly for the next few months. Each week costs between $700 – $1,000.