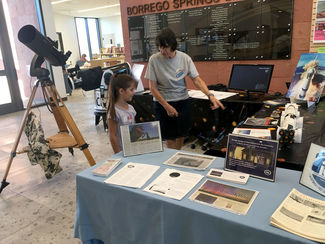 As dusk broke for the Dark Sky Party at the Borrego Springs Library on Aug. 15, not the Moon, but Jupiter appeared as the first celestial object, even displaying four of its 67 known moons telescopically later in the event.

Following Jupiter, a dark orange-red moon rose low in the east, details wondrous through both binoculars and telescope. Saturn appeared, and its rings provided both adults and kids a unique perspective on our Solar system.

The viewing session was organized by David and Cindy Decker from the San Diego Astronomy Association and hosted by librarian Cristin McVey.

Included in the event starting late afternoon and going well into the night were informational materials, telescope displays, a planet button-making device, an astronomical photography presentation, a showing of the film "First Man," and even a painting exercise while listening to a singing bowl and drum presentation by "Mark and Denise of Paradise."

The event followed close on the heels of the annual Perseid meteor shower, which peaked on Aug. 12 – 13, considered around the world to be a highlight of anyone's astronomical calendar.

Mostly no bigger than a grain of sand, meteors hit the atmosphere at 36 miles per second with peak temperatures from 3,000 to 10,000 degrees Fahrenheit.

Librarian Cristin McVey was outside at 4:30 a.m. the last night of the shower.

"I saw about 15 in 10 minutes," she said, a little over average for a typical Perseid event. This year, however, a bright waxing moon was setting, reducing the number of meteors visible and their chemically induced colors (red, blue, green) as they ionize in the upper atmosphere.

Those artistically inclined were invited to paint a picture, inspired by music during the session courtesy of "Mark and Denise of Paradise" and their singing bowls and drums. Borrego newcomer and Borrego Springs High School math teacher John Goldberg took advantage of the opportunity by painting a picture depicting diversity in the world and our community. Look for an "Arrivals and Departures" article on Goldberg in a future issue.

One tidbit was David Decker's education on "lunar libration" (nothing to do with libraries). From an observer's perspective over a typical lunar cycle, the Moon seems to oscillate left and right, and even up and down, captured by a photo sequence showing slightly different perspectives at different times in the Moon's orbit around Earth over a year. It's not a flat plane, but instead tilted at a slight angle, and it's an ellipse, not a circle. A lunar libration is a minor effect that is visible if one knows where and what time to look.

A highly informative presentation on astrophotography by local photographer Katelyn Cooke (she also does portraits and landscapes) covered the best methods of capturing the Milky Way and our Solar system's celestial bodies with an iPhone or similar mobile device via settings for aperture, shutter speed, and ISO (International Standards Organization).

Aperture should be at lowest setting, shutter speed according to the "Rule of 500" (500 divided by the focal length), resulting in 25 – 30 second exposure to minimize blurring by visible changes in star position, and ISO at highest setting; Cooke displayed her photoshopped examples that were wonders of Borrego sky photography to behold.

In the Library Community Room was a showing of "First Man" with Ryan Gosling starring as Neil Armstrong.

A real-life cliffhanger moment, not revealed to many outside the close-knit NASA (National Aeronautics and Space Administration) community at the time, was how Armstrong was forced by circumstances to land the lunar module in manual mode. His fuel supply was closing in rapidly towards zero as he guided the lander over craters that would have spelled disaster if the lander was not almost perfectly vertical for blasting off the Moon for home. He landed safely, but it was a close thing indeed, witnessed by the NASA tracking team back home showing audible signs of abject relief after watching the fuel supply drop and then confirming a safe touchdown.

Many thanks to David and Cindy Decker for making the trip to Borrego Springs to share their wonders of astronomy.