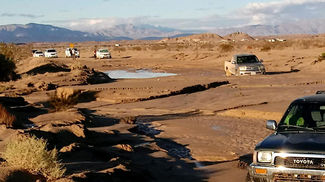 A picture IS worth at least 1,000 words, a good tow truck, strong cable and some stalwart friends.

So many of us in the West Shores areas came to remember following the horrendous storm we had last week. Point of reference: there were actually two storms but they following one another in such quick succession that it seemed like one GIANTIC comment from Mother Nature. I'm not certain what actually coerced the sleepyheads in my household to get out of bed, but I think it was the incredible lighting strike following almost immediately by a tremendous clap of thunder. The house shook.

From our perch on the wash coming down the Trough from Borrego, we could actually hear boulders being tossed about (well, maybe that's poetic license and they were rolling over one another) – in any case, they were most definitely headed downhill toward the Sea.

I don't know if folks lost power; we did not. I do know there were seemingly gale-force winds and mountains of hail. And the mud. The mud! Oh, that mud. We are indebted to the Imperial County Department of Public Works who were out in full force early Saturday morning.

In fact, by 10 a.m. I could navigate through the Treadwell Wash, The Atlantic Wash, the Dolphin Wash and the ingress and egress to my own street, to name a few. Pretty cool. I've heard that folks are unhappy with the job that was done. All I can say to that is, "C'est le vie! C'est la guerre." Oh, and please make sure your own personal 4-by-4s are in good running order.

A word of thanks!

A word of thanks to the Coach of the Borrego Lady Rams Volleyball team, Rick Rethoret, for praising our Lady Wildcats in the last issue. That, Sir, is a class act and we are grateful that you all remain such worthy opponents.

The West Shores High School Lady Wildcats are on the march toward another CIF championship post-season: CIF San Diego Section, 2018 Girls Volleyball Championship. In fact, as I am writing this, they have won their first play-off game against the Castle Park Trojans from Chula Vista, in three straight sets: 25 – 17 , 25 – 16, 25 – 16.

The next game will be Saturday afternoon at West Shores. Santa (Santee) vs. West Shores, the game starts at 5 p.m. Go Lady Cats! We're wishing them well.

By the way, their season stats are 23 – 3; this is the team's eighth conference championship appearance and their sixth consecutive trip to the quarterfinals under Coach Mark Ruiz.

Breakfast: 7 a.m. until the food is gone – VFW Hall on Desert Shores Drive; Lions Club Monthly breakfast: all you can eat of made-to-order omelets, bacon, sausage, pancakes, biscuits and gravy, juice an' joe. $7 with all proceeds benefiting the VFW and West Shores Community.

Fiesta Days, from mid-afternoon through fireworks after dark. Billed as an old-fashioned shindig, this party in the park will feature campy games like a three-legged race and egg toss, pickup softball and basketball games, a cake walk, a horseshoe tournament, some local vendors with representative wares and free grub.

Salton City Park on South Marina, east of Highway 86. Note: the party moves to Johnson's Landing for fireworks. Follow the signs. Please, come up and introduce yourselves – we'd like to get to know our neighbors in west a little better. This event is sponsored by the Salton Community Services District, as well as several community clubs and organizations. There is no cost to attend.

Yep, one of our favorite pastimes is back and flourishing. Chances to win big, including the $250 Blackout Bingo. Snacks nad beverages are available.

Bring your daubers and join us: West Shores Senior Citizens Club, 1375 Borrego Salton Seaway (S33) in Salton City. Open to the general public – anyone over 18 years of age may play.

True to form, the West Shores social scene is heating up as the temperatures fall: watch the next issue for a complete list of fall-to-winter events on the Salton Sea's West Shores.

Certified pollsters from Imperial County are at the Salton Community Services District Office, on Van Buren, Mondays through Thursdays, during the day. Any voter may deposit his/her completed ballot into the locked ballot box provided by these good folks, who represent the Imperial County. Live voting will be available again this year, Nov. 6, at the West Shores Seniors Citizens Clubhouse on S22.