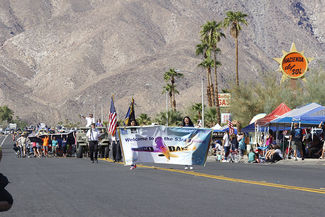 What a parade, what a festival! Patchy white clouds set against the backdrop of a clear blue sky, and under ideal daytime temperatures no less, gave all of the approximately 17,000 attendees who had their eyes to the skies, and up and down Palm Canyon Drive, a better appreciation of the 53rd Annual Borrego Days Parade and Desert Festival. Unique parade entries, great entertainment, delicious food offerings, and all the fun and laughter one could possibly stand spoke to the success of this year's signature community event.

Remarking on the excitement and satisfaction of a successful Parade & Festival, Festival organizer and Chamber of Commerce Executive Director Linda Haddock said, "Borrego Days 2018 was one to live up to. It had some bumps and rough spots, but overall was a great experience for all. Such fun, and worth the effort of so many. My heart is thankful."

Bright and early, the weekend kicked off on Friday with the annual Rotary Breakfast at Coldwell Banker, and the man who says we shall refer to him from now on as "Juanca" (short for Juan Carlos, owner of the El Borrego Restaurant) served up a delicious Mexican-style fare.

That night, with the Borrego skies revealing a bright and waxing gibbous moon, where the usual display of planets and stars showed off our Dark Sky Community, folks reveled around town for live band music; proceedings kicked off with the opening party at the Palm Canyon Hotel & RV Resort.

Opening the parade the next morning was U.S. Army Major, ret., Kapuanani Virginia Lee Johnson, Ph.D., singing the National Anthem. Then all ears were on Rick Fordem as all eyes were up in the sky as he described planes, helicopters, and two smoke-trailing Great Lakes bi-planes plowing the skies directly overhead.

Borrego Springs American Legion Post 853 color guard presented the flags, with a special appearance by "The Beast," the Legion's 1944 Scout Car. The Beast was brought back to life by the enormous efforts over the long, hot summer by Tito Molina at Tito's Auto Care.

Parade Grand Marshal and departing District 5 County Supervisor Bill Horn made his final official parade visit to Borrego after 24 years on the job. Horn will be found in semi-retirement up in Solvang, north of Santa Barbara, but only after attending the new library grand opening, scheduled for Dec. 8 as of now. Horn's Grand Marshal award went to the Victorian Rose Ladies Riding Society, and the horses were all the rage among many children.

Newly appointed honorary mayor Andy Macuga was a featured VIP in the parade, and of course there was only one thing on the minds of Borregans – the traffic signal. Macuga addressed this critical issue: "The traffic signal will be displayed somewhere in Carlee's," and adds with appropriate mayoral authority, "and I promise it will never never NEVER!" and here he got all teary-eyed as he recalled long-standing precedent, "I promise it will never be erected on any street in Borrego Springs." We'll hold him to that for the next two years. Macuga's Mayoral choice was awarded to the color-coordinated Borrego Bedrock Rockettes.

Hooley's Public House took home the "Most Energetic" award, and rightly so, as they were spotted zooming around tossing green beaded necklaces and were almost as loud as the bands.

Marching bands being among the crowd favorites, which was the best band this year? According to the judges, it was the Holtville Vikings Band of Pride, their second straight win. Coachella Valley High School came in a close second, followed by third place winner Montgomery High School Marching Band.

The California State Parks entry upheld its record of Parade awards with the Best Representation of Theme: "Eyes to the Skies." And the Borrego Air Ranch float gave a whole bunch of kids the ride of their lives down Palm Canyon Drive. Naturally, they won the Community Spirit award.

It's a good thing The Pirates of the Salton Sea had their navigational eyes to the skies, or else they might have gotten lost the night before as they headed across the treacherous badlands to locate buried pearls, gold, and other booty in Borrego. By way of great costuming and audience interaction, this parade entry won the "Best in Show" award, so a mighty 'Aaargh!' to the pirates, especially those comely wenches.

The RoadRunner Club Im-Precision Golf Cart Drill Team had an "interactive water-squirting experience," not only between nine maneuvering golf carts, but also from golf carts into the appreciative crowd of kids and adults. The team garnered its fifth consecutive win for Best Golf Cart entry. There was at least one other cart entry, the get-out-and-vote cart driven by Elaine Tulving. Don't forget to vote by or on Nov.6!

At Christmas Circle throughout the opening day of the festival, bands played, visitors enjoyed a wide variety of food offerings, the kids had their play area, and one could see the muscle cars on display or shop for clothes, artwork, and many craft varieties at the vendors' booths.

On Sunday afternoon, Mexican musical performances had folks dancing in their seats. Dan Wright did it again bringing in great bands at the Circle for both days.

And finally, the fullest amount of kudos possible to the Chamber of Commerce, led by Linda Haddock, her team, food and beverage vendors, and volunteers young and old, who together made the 2018 Borrego Days Parade & Desert Festival a great experience for all, setting the bar of expectations another notch higher for next year.