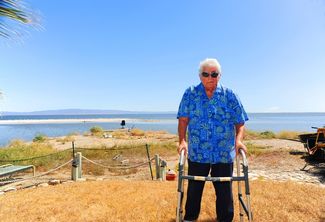 Even though one knows the inevitable is coming and no matter how prepared one is, it is still, somehow never expected to happen. The loss of a great man, Norm Niver, has touched an entire community and beyond, with shock and sadness. Mr. Niver is a loss that will be felt by many. May he rest in peace.

Elizabeth Hoffmann, one of Norm Niver's daughters commented; It is kind of shocking when your world falls to pieces and everything and everyone around you carries on with life. How can the birds continue to sing? How can people carry on loving life? It is like you have become frozen in time and are now watching life like a movie. As the weeks and months roll by, life becomes more real again, but you will never forget that point in time where life stood still.

The March 26 Artists Association, Save our Sea (EccoMedia) and West Shores Chamber of Commerce fund raiser was dedicated to Norm Niver as a tribute to all he stood for in his efforts to save the Salton Sea.

Norm and Connie bought their home at the Salton Sea, over thirty years ago, right on the water, with a spectacular view of the mountains and a few steps from the waters edge. Right from the start, Mr. Niver became a crucial part of the Salton Sea Community; becoming involved in all the politics of the Sea, in his unrelenting efforts to save the Sea through his studies, writings, educating others and fighting many battles for all of us.

Mr. Niver was part of the planning commission up until just four or five months ago. Right up to the end Mr. Niver was President of the Home Owners Association. His mission was to develop the sea.

My mother, Jan Brodie, worked for Norm at the West Shores Chamber of Commerce when I first met him, and we had so much fun because Norm loved to write. He would use those big bold letters whenever he wanted to emphasize something and exclamation marks. My mother was a pretty good editor, she had worked at a newspaper in Washington State and so she would tone him down. My mother would say, "Norm you can't say that, you look like you're trying to sell something." Mr. Niver would say, "Well, I am!" They would get into battles over the editing of his writings.

Mr. Niver was very successful with the West Shores Chamber of Commerce. People had a lot of respect for him.

There was always a cocktail hour at Mr. Niver and his wife, Connie's home. I saw Norm mostly at cocktail hour over the last few years. It was a short cocktail hour, starting around four to five o'clock.

The conversations were always lively and there were people there; sometimes it would be just the two of us and sometimes it would be six or seven people that had come over; so it was a lot of fun. Mr. Niver was always gracious and there was never an end to the interesting conversations. Mr. Niver's friends were diverse, from different places around the country, and each one had their own interesting perspectives. The people of Salton City are not short on opinions and we discussed all of them at Mr. Niver's happy hours.

The sea water, over time evaporated away from his canals but, the pleasantness and fond memories of those cocktail hours will forever be remembered.

Many, many friends went to Norm and Connie's for Thanksgiving and other holidays. Mrs. Niver was a magnificent cook and she kept Norm's table very full. They enjoyed their life together.

Norm, a theater buff, wired many of the stages at which he played. He was an expert with speakers, plumbing and air-conditioning. He would be on someone's roof wiring an air conditioner in 115 degree weather. Mr. Niver put in speaker systems at clubs where the big names sang, he was very proud of that.

He would talk at length about all the things that many of us know nothing about, but he was very proud of his electronic knowledge; he kept it with him all the time. He was always working on something – he was still working on his computer the days before he died, he never gave up on that, and he was always involved with his electronics.

Mr. Niver was a ham radio operator guy and he liked to talk with people around the world. Mr. Niver loved to talk about the technical part of radios – he built his own radio when he was a kid, electronics was a passion from a young age on.

Laith: I didn't know until today that he passed away. I've known this guy for probably forty-five years. He was super neat guy. I've known both his wife Connie and Norm very well from back in 1940. You couldn't meet a better couple to be together, they stuck through thick and thin. It was on my mind to go check on them for the past month, to see how they were doing. I feel so bad I waited and it was too late. I will miss you Norm.

Celeste: I met Norm ten yrs ago at a chamber of commerce mixer. I spotted him right away with his brightly colored hawaiian shirt sporting a smile. Being new in town and just starting to meet people; I thought, 'My god a normal looking person!!'

As the years went by I attended some of the same meetings that he was involved in. One of those meetings I rode with Norm in his vehicle. Driving home, through one neighborhood after another and turning and twining through one street after another, I didn't know where the heck he was taking me; This was supposed to be a short cut home. Don't know if it was, but he talked the whole way. His conversation was always interesting and all the things he has done is his life are amazing.

Norm never had a bad word or a frown on his face for anyone. He had as big of a heart as anyone could imagine.

My husband was in his last season on earth and we were down here in Salton City. Norm had just gotten out of the hospital himself. He still had bells palsy which left his face distorted (like a severe stroke might look) but here come Norm, up the side walk with his cane and his poor feet and legs so swollen. He came to visit and ease another mans pain. Even though Norm wasn't well himself, he made sure he came to see a friend to make him feel better. We love you Norm.

Kerry: I would say that Norm has truly been an inspiration for so many, largely in regard to the Salton Sea. He cared about this place more than almost anyone in the world. For many decades he did an enormous amount of good work. He shared positivity, hope, solutions and encouraged everyone who believed in this place. He was an inspiration to me.

When I came out here in 2011, one of the first people recommended for us to go meet was Norm Niver. I interviewed him and he went on for hours about the sea. We had way too much footage but it was definitely inspirational and he could definitely answer any question.

He was always so warm and caring and welcoming, he was one of the warmest people I've ever known and I don't know if I would be in the same place if it weren't for him. He's been so supportive over the last few years and we hope to cary on his legacy in working for restoration of the Salton Sea.

We are really grateful to have known him. He is a very sweet soul that will be missed. He will live on with everything that we do. Thank you Norm, we are going to save our sea.

Kathy: Hey, Norm, although we all knew you were not in good health for some time, this is a shock.

All the stories about the bus rides you took with bands across country, we will miss. There are so many aspects to your life such as television repair, air conditioning repair, being up on roofs putting antennas up all around here and all your stories. Connie, as it was said earlier stuck with him like no body would believe, through thick and thin, for better or for worse, in sickness and in health. He loved her for it and we all know how she loved him, it was evident.

Denise: Starting in 2010 when Connie would go to visit her family in Nevada; Norm would be home alone, so Kathy and I would take him over to the Alamo restaurant, he just loved to go there.

One time our car broke down (the battery went out). We were at Salton Sea Beach, it was getting dark and everyone had left for the summer so the only person we could call was Norm. He came right out to help us.

He got our car running. Kathy got in Norms car and I followed Kathy and Norm down Hwy. 86 going only about 40 mph. I thought, why are they going so darn slow?

I kept honking and flashing the brakes and going slower than them to get their attention. They finally pulled over so I could ask, why are you going so slow? (I thought we were going to get a ticket). Kathy was driving and she said, 'well I didn't know how slow we were driving'. I said, well why not? she said because the speedometer doesn't work. So anyway, we finally made it back to the city Well, thats just kind of a funny store. We love you Norm.

Steven: Norm Niver was alway a gentleman, he was a kind and loving and his heart and spirit he was a spiritual human being. We will miss his presence. He was a positive influence. Good Night sweet prince, may flights of angles take thee to thy rest.

Kerry Morrison: Led the group in silent reflection/prayer in memory of Norm Niver

Bob Brodie: Norm grew up in Redondo Beach, California. He joined the Air Force and was able to play in the Air Force Jazz band traveling all over the country.

After the military, Norm traveled all over the Country with big name bands. When Frank Sinatra came to the Palm Springs area Norm would be their too, playing in the band and this is where he met Connie, his wife.