Scouting Mission for Water from Sea of Cortez 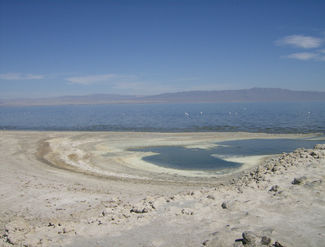 A scouting expedition will be done in three stages before the final 'Sea to Sea' walk takes place next October, 2016.

EcoMedia Compass staff and scientists will be looking for water, and on each expedition GPS mapping will be done along with environmental surveys, as there is a need to understand the species living in each area. The entire expedition and studies will be filmed.

During the three expeditions, we will be interviewing experts and community leaders in Mexico and this side of the border. Many people across our country and across the Mexican border are in need of water. We need a lot of support from both sides to find the solutions to our Drought. Sponsorships are also needed from engineers and companies with an interest in this project.

This walk to find water has lots of options if we pay attention to them. We are working to find easier and by far less costly solutions to bring water to the Salton Sea.

There is already an existing canal which partly connects the Sea of Cortez to the dry Laguna Salada lake bed. The canal runs much further north than we expected, we estimate about 120 miles from the Sea of Cortez bring water to the Salton Sea, which is mostly downhill.

This water can improve the seas water quality, mitigate any dust concerns, maintain a recreation lake, a habitat for shore birds and fish giving us tremendous potential for desalination of drinking water. Imperial Irrigation District's (IID) plan so far has been creating 2,700 miles of canals restoring the Salton Sea at a much greater expense.

The crew, scientists and media will drive to Laguna Salada for GPS mapping, documentation and filming. The crew will drive to locations beingstudied via highways and roads in order to determine the most accessible route.

This mission will take place in Spring, 2016 and will take three to four days to complete. This time driving to the Sea of Cortez to survey the tidal flood zone of the Sea and explore the area that connects the Sea of Cortez to Laguna Salada (this survey will be a bit of a challenge due to the potential of very high winds). 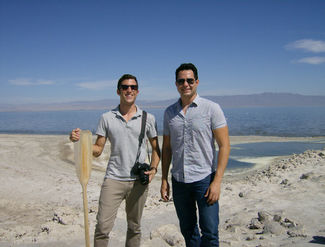 Salton Sea is receding at an alarming rate.

This mission will take place in the Fall of 2016, just prior to the final 'Sea to Sea' walk, scheduled in October, 2016. EcoMedia Compass along with the scientists and media involved will start at the Sea of Cortez to confirm their final route, collecting additional data to determine their final decisions and plan for the 'Sea to Sea Walk.'

There will be a lot of filming and interviewing in order to make this exploration and the final 'Sea to Sea' walk as real as possible for people who cannot walk it themselves.

The 'Sea to Sea' walk will begin at the Sea of Cortez and walked all the way to the Salton Sea symbolizing the direction water of the water flow.