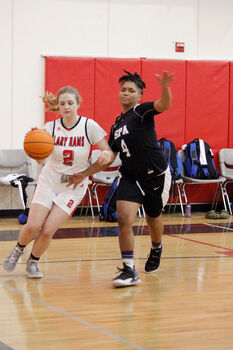 Senior small forward Hannah Strate gets past the defender at the base line.

It was a low scoring game for the Borrego Springs girl's basketball team against San Pasqual Academy on Jan. 11 at home.

The team hoped to start the new year with a win, but the San Pasqual Lady Dragons came out ready to stop the Lady Rams.

The team also faced Warner Springs in an away league game, and fell 30 – 28.

They also had another shot against San Pasqual Academy, in an away league game, which took place after print.

In the game against the Lady Dragons, they were on the board first and led 3 – 0.

The Lady Rams were finally on the board with a shot by sophomore small forward Melanie Urquidez with the assist by senior point guard Danica Nehrer, 3 – 2.

In the second quarter, it seemed as if both teams could not connect with the basket. However, defense was solid and key.

SPA managed to get two shots in and extended their lead, 7 – 2.

In the third, the Lady Rams were back on the board with a rebound by senior power forward Alessandra Reyes, 7 – 4.

However, SPA answered back with a put back rebound of their own.

With 2:46 on the clock in the third, sophomore point guard Abigail Gonzalez found senior small forward Hannah Strate for the inbound pass, 9 – 6.

SPA got a shot in after a steal and sank in a free throw, extending their lead, 12 – 6.

To start the fourth, the Lady Rams were quick to get on the board.

The Lady Dragons answered right back.

The teams went back-and-forth, each scoring once.

The Lady Rams could not overcome the deficit and could not get a shot in.

It was a slow game throughout, however, it seemed the momentum could not get on the side of the Lady Rams.

As the season continues and the Lady Rams get into Manzanita League play, it will be interesting to see what the team does to overcome hard losses like this one.

The Lady Rams are back in action in consecutive away games beginning Jan. 20 against San Pasqual (non-league), Calexico Mission (league) and West Shores (league), before returning home on Jan. 31 to face Warner Springs in a league game.