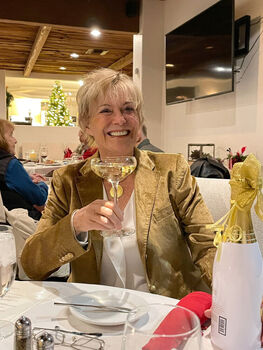 Beloved member of the Borrego Springs community, Liesel Paris, passed away on October 19, 2022.

Liesel was born in rural Austria on Dec. 11, 1940, during World War II. She went to boarding school in Salzburg, and studied Art and Graphic Design in Vienna.

Growing up in Austria, she fell in love with the American way, having met several Americans on holiday. At the age of 25, she came to the United States.

In 1966, Liesel graduated from Braniff Graduate School of Liberal Arts in Dallas. Between 1967 and 1969, Liesel worked as a stewardess, first on commercial flights, and then out of Travis Air Force Base, bringing back soldiers from Vietnam.

In 1969, she married her first husband, Brian, from Canada, and moved to Vancouver. The marriage did not last long, and after moving back to the United States, she enrolled at El Camino College to study nursing. As a nurse in Los Angeles, she met and married her second husband, Dr. Jaime Paris.

Jaime was an endocrinologist working in private practice and associated with St. John's Hospital in Santa Monica. Liesel worked with Jaime in Santa Monica and was instrumental in assisting his work at the medical clinic in Borrego Springs.

Liesel and Jaime purchased a second home at Rams Hill in the late 1980's, and in 1995, sold their Santa Monica home and moved to Rams Hill permanently. They would spend and enjoy summers at their condo in Aspen.

Liesel had shops in Borrego at various times, where she sold her beautiful reverse glass icons and paintings, as well as Armand Valle's artwork when she inherited his collection upon his death. After Jaime's death, Dee Weaver, Liesel's partner, worked with her, assisting in the shop.

Liesel was also very involved in many groups during her time in Borrego. She was an active member of The Naturalist Club and The Art Guild.

In recent years, Liesel and Dee would travel to Nepal visiting Dee's relatives and helping the people of Nepal. She donated and raised money for the people of Nepal after the devastating earthquake. It was in Nepal that Liesel learned about singing bowls. She was active with a group in Borrego using the power of the singing bowls for meditating and healing.

Throughout her life, Liesel kept in touch with her family overseas. First with her mother whom she visited in Austria. After her mother's death, Liesel spent time with her beloved nieces, Michaela in New Zealand and Christiane in Austria. She particularly enjoyed time with their children and families.

Liesel was beautiful, talented, kind. She always lent a hand when someone was in need. We miss you deeply, our dear Liesel. May the sun shine upon you and love surround you. May the pure light within you guide you on your way. As long as you live in the hearts of the family and friends you leave behind, you remain alive.