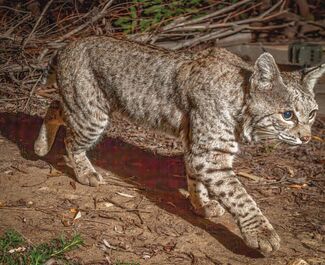 At first glance, the tracks in the damp sand next to Coyote Creek at Lower Willows looked like a house cat had recently passed by.

That couldn't be right.

These tracks were nearly twice the size of a typical house cat, suggesting more accurately that these were footprints of an elusive bobcat.

It might be surprising to learn that these predators are far more common in Anza-Borrego than you'd think.

This member of the lynx family is smart, secretive and most active at night, making daylight sightings rare. Homeowners with game cameras will often capture images of these beautiful cats making nocturnal visits to water sources.

The bobcat is an excellent hunter, often ambushing its prey, which includes mice, rabbits, reptiles and birds.

Bobcats are beneficial creatures, consuming an average of 700 rabbits and over 3,000 mice annually.

For their size, the bobcat is lightning fast and powerful.

With beautiful, spotted coats, the bobcat is about twice the size of the domestic feline. Males can weigh 16 to 30 pounds and females average around 20 pounds.

Bobcats are lean and easily identified by their short, black-tipped "bobbed" tail, yellow eyes, cheek tufts and black hair at the end of its ears. Long whiskers act as sensors that allow bobcats to hunt in total darkness.

Rangers sometimes get reports of a mountain lion sighting, when more often it's a bobcat. The key difference is the tail. A mountain lion has a very obvious tail, nearly as long as its body and is significantly larger than a bobcat.

Unlike coyotes that hunt in packs, bobcats are solitary animals with a range that extends throughout North America. While elusive, they have a healthy population, estimated by wildlife biologists at more than one million in the United States.

Typically, bobcats have litters of one to six kittens that remain with the mother for up to a year as they learn to hunt, and the skills needed survive on their own.