What does this mean for the spring wildflower display? 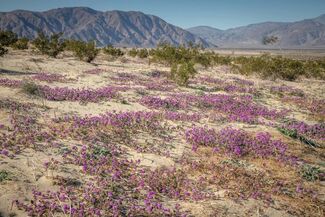 As nature lovers returned to the desert this fall, they were greeted by an unexpected, spectacular wildflower display.

This is hardly typical and was a pleasant surprise, thanks to and abundant series of well-spaced summer thunderstorms and mild autumn temperatures.

Desert veterans were ecstatic at the fall bloom that was even more intense than some spring wildflower displays when rainfall doesn't come at the right time or in the right amounts.

While some called this a "False Spring" bloom, former Anza-Borrego Park Superintendent Mark Jorgensen said there was nothing false about it. This wildflower show was simply nature taking advantage of the right conditions.

"Plants and animals in the desert have to be opportunistic and cannot pass up a chance to flourish and reproduce if given the right circumstances," Jorgensen said.

He pointed out that temperatures, the sun angle and the amount of daylight in late September duplicated conditions normally seen in March when wildflowers typically bloom.

Winter rains bring the extra ingredient needed for the spring plants to grow.

This year, the rains came during the summer. Jorgensen measured over three inches at his Borrego home, and as much as eight inches fell in other areas such as Culp Valley and upper Coyote Canyon.

The magnificent combination of temperature, rainfall and sunlight came together to produce the unusual fall flower show.

Some of the best displays were thick clusters of goldeneyes in Culp Valley, blooming ocotillo in several locations around Borrego Springs, carpets of yellow chinchweed in Coyote Canyon, and a purple haze on the dunes east of Clark Lake along S-22 and along the toe of the towering Santa Rosa Mountains. This unusual fall bloom went beyond just flowers. The whole ecosystem was energized.

The hummingbird-like sphinx moth and their large caterpillars became part of the fall frenzy. Flying ants and gnats quickly joined the autumn cast of characters.

If these creatures hang around, it could have an impact on the spring migration of Swainson's hawks that feed on these sources of protein. More food means more birds. Fall was the perfect storm for nature to thrive in the harsh environment of the desert.

"This was a key response by the opportunistic species which have adapted to our harsh ecosystem that has allowed them to survive for thousands of years," Jorgensen said.

So, what does all of this mean for next spring? Is this it? Have we seen the wildflowers for this season? Jorgensen is hopeful.

"I can imagine this fall bloom can only provide an added seed bank to the ground and set up for spring rains if they come. The ground cover also retains the soil moisture and resists drying by winds, as well as providing shade to the ground," Jorgensen said.

The fact that flowers bloomed this fall should not exclude the spring annuals from blooming again in the spring if conditions are right.

"All these species are opportunistic and must attempt to produce seeds when the rains come," Jorgensen said.

Additionally, soil moisture is holding well from the monsoonal rains and that sets up a good situation for spring. Like anything with nature, there are no sure bets.

"We don't really know what to expect anymore. Seemed for decades we could set our calendars by the monsoon arrival, and again when winter arrived, but these days we are left wondering what will happen next," Jorgensen said. "It makes things interesting as we get older and get to thinking we know everything. Just when we think that, we don't!"

In the grand scheme, it's all about patience and timing.

For now, we will have to be patient to see what spring brings.