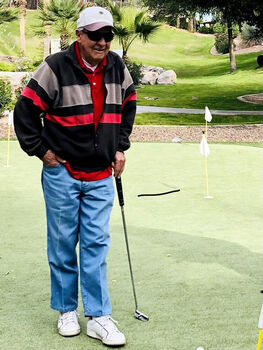 On Sunday October 9, 2022, Donald H. Shindler passed away peacefully in his sleep in Loma Linda, California at age 95. Don, the youngest of seven, was born in Rosalia, Washington on October 31, 1926 to C.J. and Nellie Shindler.

Don worked on the family farm before enlisting in the marines where he served in World War II. At the end of the war, he returned to Rosalia and he married Barbera Trunkey. They had three children together.

Don moved to Las Vegas where he worked at the Mercury Test Site. Later in life, he married Jane Eagle. They spent their retirement years in Borrego Springs, California.

Golf was Don's greatest passion. He has had seven Hole-in-Ones – the last being when he was 92 years old. He was an avid sports fan.

Don was a member of the American Legion. He was known to his family and friends as a positive and fun-loving man. He had a quick wit and loved playing cards while telling stories.

In lieu of flowers, donations may be made to the Rosalia, Washington Fire Department or the charity of your choice.