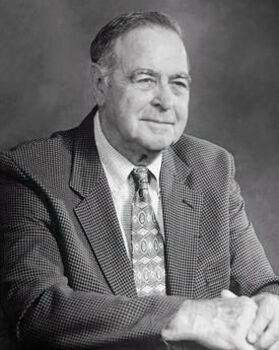 Allan Payne Hansberger ("AL") passed away peacefully on October 25, 2022. He was 98 years old (September 19, 1924) and a resident of St. Charles, Illinois and Borrego Springs, California.

Born in Worthington, Minnesota to Floyd and Edythe, Al was one of six children. His parents eventually moved the family farm to Dawson, Minnesota, where Al met his wife of 65 years, Beverly Saltness. Bev passed away in 2015.

After serving for two years in the Army Air Force during WWII and some college, Al moved to Chicago to join his older brother William "Lyle" Hansberger in the golf club manufacturing business which was later named Ram Golf and was the family business for more than four decades.

Al traveled the world for business and played golf with pros and celebrities alike, including President Gerald Ford. But he always found time for his family. Al was hardworking, generous, kind, and had a quiet way of connecting with people.

He and Bev supported many charities including the Kids Golf Foundation, the Campaign for Equal Justice, and the Boys and Girls Club in Borrego Springs.

A memorial service to honor both Al and Bev is being planned for the Spring of 2023.