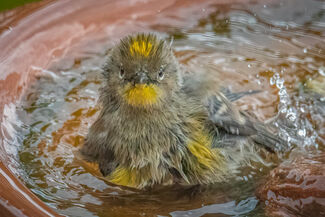 We aren't talking about the snowbirds from Canada or the sunseekers from the coast, but these are real birds.

As ice and snow arrive far to the north, yellow-rumped warblers and white-crowned sparrows migrate south for the winter, becoming the most numerous bird species in our region.

Retired park ranger and avid birder, Robert Theriault has already documented their arrival here, and numbers will continue to climb as flocks settle in to enjoy our winter hospitality.

Both species will be active here until spring, when they return to summer nesting grounds as far north as the arctic slopes.

The nice thing about these visitors is they are easily identified.

The white-crowned sparrows have crisp, white and black stripes on their head. They also tend to gather in flocks, so when you see one, you are likely to see several.

They will be the most numerous here during the winter, feeding on native seeds and wild berries. They will eagerly gather at your home seed feeders.

As their name suggests, the easiest way to identify is the large, yellow spot at the base of their tail. This spot is often hidden when the birds are perched, but flashes when they take flight. They are affectionately nicknamed "butterbutts."

Additionally, this warbler has a small yellow spot at the top of the head, a yellow throat and yellow patches on the breast just below the wings.

These are also flocking birds, often arriving as a group to forage for insects, spiders, small grubs and plant-lice and their eggs.

It's not uncommon to see them along the banks of Coyote Creek or perched momentarily in the branches of an ocotillo.

Both species do not breed while here over the winter months.