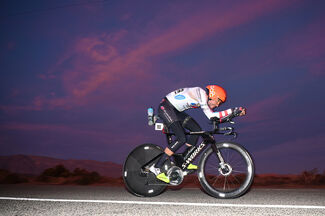 Cyclists from all around the world participated in the 6-12-24 Hour World Time Trials, Nov. 4 to Nov. 6 These time trials are qualifying events for the Race Across America in the summer, when riders ride through the first timing station right here in Borrego Springs.

The course consists of 2 loops – an 18-mile loop and a 4-mile loop. Competitors will race the 18-mile loop from their start until approximately two hours before the finish, then they will begin racing on the 4-mile loop until they finish.

This race has become one of the most popular and highly attended events on the ultra-cycling calendar, having sold out the past four years.

There were over 200 participants, competing in the seven age-group categories within seven event categories.

Somehow Hackinen doesn't consider herself to be a "fast cyclist." In her opinion, her strength is in being able to just keep going for a long time. But it takes more than just endurance to achieve what she has in her relatively short time in the ultra-cycling world.

Hackinen is the woman who finished second to Jennifer Orr (USA) in WTTC 2018, came back a bit wiser, a bit more prepared and a bit faster to win the 2019 women's overall by a wide margin with a tally of 460.8 miles, breaking the previous mileage record of 456 miles held by Orr.

This year, she knocked that record down AGAIN, with a 24-hour tally of 478.8 miles to totally dominate the women's field AND to finish second overall – only men's 24-hour solo overall winner Philipp Kaider (Austria) rode farther here in Borrego Springs.

Kaider did 531.6 miles to become this year's only new member of the "500 Club," while Hackinen came oh-so-close to becoming the first women member – just 21.2 miles more!

Kaider, the overall solo winner and newest member of the 500 club is the man that 6-time RAAM winner and 6-12-24 Hour World Time Trial Championships record holder Christoph Strasser (Austria) told us to watch, rode to the overall solo 24-hour win and to the win of the solo men's age 30 – 39 category with a final mileage tally of 531.6 miles.

This newest member of the "500 Club" also posted the third highest mileage in WTTC history. Only Strasser has done more.

While Ralph "Dizzy" Diseviscourt (Luxembourg) is a WTTC rookie, it comes as no surprise that he took the lead early in this 2022 edition of the 6-12-24 Hour World Time Trial Championships. He's one of the most experienced and accomplished ultra-cyclists of this year's race.

In 2018, he completed his second RAAM, finishing as the second male soloist behind Christoph Strasser. Dizzy's 2018 RAAM finish time of 9 days, 12 hours and 33 minutes (13.43 mph avg.) knocked a day and a quarter off of his 2016 rookie RAAM. Before becoming an ultra-cyclist, he competed in traditional road cycling at the highest amateur level, participating in events that sometimes combine top pros with amateurs and national team members.

"There was never an ambition to get a pro license," he said in a pre-RAAM interview, which is understandable since he works full time in banking. Amateur or not he's had some impressive results – in 2009 he won the Luxembourg national time trial championship. And if there's anyone primed to become a member of the "500 Club" (an honor bestowed upon those riders who tally 500 or more miles at WTT) it's Dizzy. Last year, he broke Strasser's 24 Hour Outdoor Track World Record by riding 927km/576 miles on a Belgian velodrome.

However, after a spill on the course, he was unable to finish the race after suffering a suspected broken collarbone.

Maria Parker (USA), the woman who had her follow car rear-ended and destroyed in RAAM 2013, but then went on to win anyway, (after stopping for 24-hours!) competed in this year's race. Parker is in the 12-hour women's age 50 – 59 recumbent division, and is of course aboard a Cruz Bike – the company is owned by she and her husband Jim.

What's considered to be an active weekend for a 75-year-old? A round of golf and some gardening? Perhaps a few games of bocce ball? Or, as in the case of Herve Talabardon (France), how about riding a bicycle for (so far) 108 miles in 6 hours as he's done tonight here in Borrego Springs.

Talabardon, the oldest solo to ever complete RAAM, is killing it in the 24-hour age 70-79 category. Stacked up against the other solos, regardless of age or gender, the retired banker is currently the 45th solo overall – ahead of more than half of the rest of the solos.

Talabardon was slated to compete in this year's Race Across the West in an attempt to become the oldest RAW finisher, but withdrew to attend to family issues, and has rolled his entry over to next year.

The 24-hour men's age 40 – 49 category is one of the biggest categories with 14 men vying for the world title. Leading them was former road cycling pro Alberto Blanco (USA). the Cuban born rider has put in 414 miles, which not only put him in the lead in his category, but ranked him as third solo overall.

Blanco is a sentimental favorite of many long-time RAAM fans. He's the man who in 2011 developed a severe case of the dreaded Shermer Neck but nonetheless made it to Annapolis through sheer will, stubbornness and duct tape to take fourth place and rookie of the year honors. He's had some great rides at WTTC.

Ryan Collins (USA) was in familiar territory – at the very front of the 12-hour solo field. At just past the 8-hour mark of this race, Collins completed 180 miles. Earlier overall leader Cesar Valera (USA) rolled across the timing strip to also tally 180 miles, but did so about six minutes after Collins. While Valera no longer had the overall lead, the triathlon trainer still held the front position in the 12-hour age 40 – 49 group. Collins of course is also the leader of his 20 – 29 age category.

Results for the six-hour event will be in the Nov. 24 issue of the Borrego Sun.