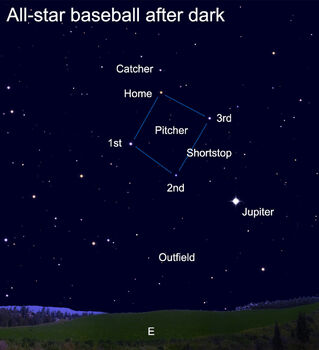 High in the eastern sky after dark right now we can see four equally bright stars that form what astronomers know as the Great Square of Pegasus. A fan of our national pastime, of course, might prefer to see it as the Great Celestial Baseball Diamond.

I remember as a kid sitting in our front room next to our small black-and-white Motorola television set as my dad introduced me to many of the comedy teams of his day. What a treat it was to share laughter with him over such classic acts as Laurel and Hardy, Our Gang, the Bowery Boys and many others.

But of all these hilarious acts, there's never been any question about my all-time favorite comedy routine: Abbott and Costello's "Who's on First?" You remember how it goes: "Who's on first? What's on second? I Don't Know's on third..."

Even after all these decades, I can't even think about this brilliant skit without doubling over from laughter. If you've never heard it, and even if you have, you really should check out the 8-minute classic here: youtube.com/watch?v=kTcRRaXV-fg.

I guess baseball is on my mind right now because the 2022 World Series is upon us. And, once again, my favorite teams are sitting at home watching on TV!

So what does baseball have to do with stargazing, you might ask? Plenty.

Let me show you.

High in the eastern sky after dark right now we can see four equally bright stars that form what astronomers know as the Great Square of Pegasus. A fan of our national pastime, of course, might prefer to see it as the Great Celestial Baseball Diamond.

Highest in this square – sorry, diamond – we see a star marking home plate. Moving counterclockwise around the diamond we encounter first, second and third bases. With some imagination, a creative stargazer might even spot the pitcher, catcher, shortstop, umpires, on-deck batter and base coaches along the way.

Way too many outfielders, though!

Now, while you're gazing up at this all-star baseball game, you may be tempted to ask, "Who's on first?" Well, the answer is Alpheratz, a name that comes from an Arabic word meaning "navel of the mare." On second base you'll find Algenib; on third is Markab. Batting at home plate is Scheat, and right behind is the catcher named Matar.

The stars of Pegasus are more classically associated with the front and mid-section of the great winged horse of antiquity, who flew to Mount Helicon in Boeotia where the nine Muses lived. Upon landing, one of its hooves tore open a spring of gushing water that became known as the Hippocrene or The Horse's Fountain. It was said that drinking its water conferred on one the gift of verse and, ever since, the figure of Pegasus has been a symbol of poetry and the creative arts.

It's certainly a fun story from ancient mythology, but trying to trace the outline of a horse among these stars is another matter altogether. Not only is Pegasus supposed to be a flying horse, but it also appears upside-down. And if that isn't confusing enough, there's only half of an upside-down flying horse in the sky. No wonder we have trouble making it out!

Nah, I'm a pretty simple guy. Forget the mythological winged horse and give me a celestial baseball diamond any day, even if I have to repeatedly answer the immortal question, "Who's on first?"