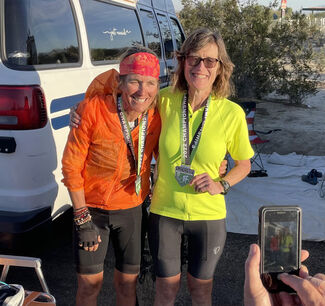 As many cyclists from all over the world and their crews made the trek down to Borrego Springs to compete in the annual 6-12-24 Hour World Time Trial Championships, our very own Sylvia Maas did not have to travel too far.

Joining 200 plus racers from 14 countries, 25 plus states, and four continents, it was a balanced field of veteran and rookie racers, the competition was fast and furious down to the last minute.

According to Maas, this was the first year the competition was opened to international competitors, following COVID.

"It was the strongest field of riders I have ever encountered."

Maas, a full-time resident of De Anza Resort, won first place in "Women's Two-Person Team" and first place in her age group, 50 – 59 for the 24-hour category. Her partner, Rachael Monderer, is from Tennessee, and the two plan on entering a two-woman race in Texas as their next competition. The two met previously in Texas, hence their team name "We Met in Texas."

"The weather in Borrego Springs was very cooperative, nice with no wind, but for the 12-24- hour competitors, the nights were cold at 36 degrees," Maas said. "I love living full time in Borrego Springs, I can always work out here."

"Team Echelon" came in second place, logging 366 miles compared to the 420 done by "We Met in Texas."

The Santa Rose resident is an Emergency Physician whose usual athletic outlet comes from doing Aqua-Bike events – basically triathlons with no running. He made the best of his first visit here to Borrego Springs. He had a great time and will be back in the future.

Louie Amelburu (USA) came in second overall and first in the 50 – 59 category.

Thrude Natholmen came in so close to the record for the 6-hour women's category. Natholmen (Norway) is usually a time-trialist and short-distance road racer. But she came to Borrego Springs and put in 132 miles to take the women's overall win and to also win the women's age 40 – 49 category. Unfortunately, she didn't know how close she was to Felicity Joye's 6-hour women's record of 136.8 miles (23.1 mph average). Natholmen said that she could have turned it up just a little more to better that.

Donna Phelan (Canada) came in second for the women, but first in the 50 – 59 age group.

"I pulled my Achilles about mile 150 (due to a very, very sore knee messing w my pedal stroke). I continued to "race" (couldn't put out much power) until mile 215, hoping that it would loosen up, but the opposite happened. It got tighter & more sore with each pedal stroke, to the point that it felt like it may tear at any moment."

The injury was evidently fairly serious, undergoing surgery. It's been a tough year for her injury-wise. She was slated to compete in Race Across the West back in June, but unfortunately she was hit by an errant driver back in January, suffering a broken left fibula and tibia, and spent the next several months recovering. Her first race back, the Silver State 508 was successful indeed – she was the overall women's winner of that classic event.

With his very non-aerodynamic beard that was seemingly overcome by his obvious enthusiasm, Patrick Hailey (USA) made the best of his first participation in the 6-12-24 Hour World Time Trial Championships. Hailey dominated the men's 24-hour age 20 – 29 category with a final tally of 469.2 miles (19.6 mph average). His closest chaser, Damian Parlee (Canada) pedaled out a total of 424.8 miles.

As with most ultra-cycling events, the youngsters are usually overshadowed by the slightly older, more experienced racers and the fastest times are usually posted by riders in their 30s, 40s and sometimes even their 50s. While that still held true this year, it was great to see the younger riders upping their games.

Long-time friend of RAAM and former Irish pro racer Mick Walsh (USA) left his mark on the 24-Hour Men's Age 60 – 69 with a winning tally of 402 miles.

Mick and the RAAM organization go way back – he was a member of the RAAM Racing Team 4-man squad at the 2010 Furnace Creek 508 that included team members George Thomas, Mick Walsh, Tim Case and Rick Boethling. Walsh's participation in WTTC began at the old location in Thermal, California. In 2014 Walsh partnered with George Thomas to win the 2-rider male age 50+ category in the Race Across the West, winning that 848 mile event in 2 days, 2 hours and 17 minutes, some 4 ½ hours ahead of second place.

In the early going Walsh had trailed 11-time Race Across America (RAAM) starter Fabio Biasiolo (Italy), who based on his five RAAM finishes was considered to be a favorite. But Biasiolo, the only Italian 3-time RAAM podium finisher, (2000, 2005, 2006), withdrew from the race after his 10th lap of the 18-mile long course. He later wrote on his Facebook page, "My only 15 days of soft training, forced me to slow down and give up definitively due to inability to continue with those rhythms. Someone thinks 'you could slow down,' I say that you don't go to a competition on the other side of the world to participate, mentally you always go to win even though you know you are not completely sure."

We hope to see these racers back once again for the annual Race Across the West Competition in June 2023.