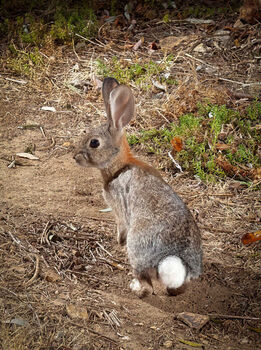 Those large black tailed jackrabbits are a common site in the Anza-Borrego Desert, but the smaller desert cottontail is also found here and easily identified by the puffy white tail that resembles a cotton ball.

While both species of rabbits are related, the thumper jackrabbit is much larger at three to seven pounds, while the cottontail rarely exceeds three pounds.

In addition to the differences in their tails, jacks have much larger ears, nearly twice as long as the cottontail.

While cottontails are considered true rabbits, jackrabbits are actually hares, which are typically larger than their rabbit cousins.

The desert cottontail bears live young in a nest lined with soft grass, fur of feathers, located in a sheltered spot in dense underbrush or an abandoned animal burrow.

The newborns' rabbits are hairless and blind and unable to care for themselves until weaned at about two weeks of age.

Soon after that they will venture from their nests.

Cottontails are active early and late in the day and at night, but if disturbed will dash away from approaching danger at any time of the day.

Their diet is primarily grass, but they will feed on a wide variety of native plants, including cacti and various shrubs.

They are well adapted to the desert environment with their large ears serving as cooling radiators. This rabbit rarely drinks since they obtain most of the water they need from their food or the moisture on the plants they eat.

While this small rabbit is prey to coyotes, bobcats, owls, raptors, foxes and rattlesnakes, it can flee danger at speeds of 20 miles per hour running in a zigzag pattern.

If cornered, they can knock down smaller predators with their powerful hind legs.

In addition to being cute, the little cotton-like tail serves as a danger signal to other rabbits when they expose the white patch.

If you see a cottontail, chances are you might see it again. The male territory is about 15 acres and the female range is less than an acre.