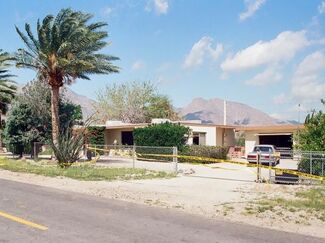 The home of 72-year-old Claire "Kay" Holman in Borrego Springs.

After 28 years, the case of the 1994 murder of a local woman in Borrego Springs is no longer cold. The San Diego County Sheriff's Department announced that they have identified the alleged killer of 72-year-old Claire "Kay" Holman, as a man who himself died 15 years ago.

The incident occurred back on March 21, 1994, when units responded to the 700 block of Tilting T Drive in Borrego Springs, where they found Holman dead in her home. After the County Medical Examiner's Office conducted the autopsy, they had determined the cause of death was due to ligature strangulation, and ruled it a homicide. At the time, investigators could not conclusively identify a suspect.

In 2003, a Sheriff's Crime Lab obtained a DNA profile from evidence obtained at the crime scene in 1994. That profile was entered in the Combined DNA Index System (CODIS), but no matches were found.

Then in March of last year, the Sheriff's Homicide Cold Case Team reviewed the Holman murder case for possible use of genetic genealogy in hopes of being able to identify the killer.

Then in April 2022, a strand of hair with a DNA sample was obtained that was recovered as evidence from the crime scene in 1994. With much development, this allowed detectives to lead them to Jerry Dewayne Robison, at the time, a 51-year-old Borrego Springs resident, as a possible suspect in the case.

In September, through the investigative genetic genealogy, the cold-case team was able to positively name Robison as Holman's killer. Robison died in 2007.

The families of Holman and Robison were notified of the determination.

The motive of the case is still unknown at the time of print.