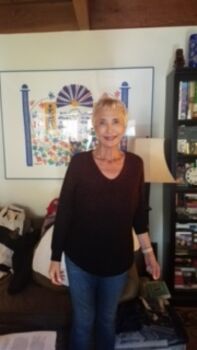 Rose was born in Canton, Ohio and went on to graduate from UCLA with a Political Science degree and pledged Delta Delta Delta Sorority. Her first husband Donald, had her move to Sweden and then she came back to Los Angeles to embark on a career renovating property. She married and divorced Phillip Woelfel while in L.A., and then met the love of her life, William T. "Bill" Grant there and settled in La Jolla in the 1980's.

Rose then pursued her passion for art, sculpting in marble in Pietrasanta, Italy and abstract expressionist painting at her Borrego Springs home studio. She wrote a children's book, theatrical plays and had her own La Jolla based investment firm "Lam & Wagner". Rose ultimately was in a global biotech project and pursued it to the end. She had a great love for art, music, travel, opera and film.

She was preceded in death by her late husband Bill Grant and leaves her brother Dan Schario, nephew Steve Schario and nieces Melissa Stillion and Autumn Newhart of Canton, Ohio and brother Rich Schario of San Diego.

A funeral mass will be held at Mary, Star of the Sea Catholic Church in La Jolla on Friday September 21, 1 p.m.