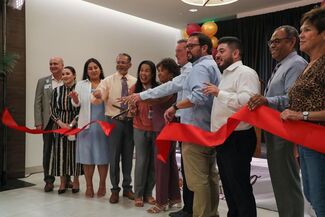 Rosemarie MacIsaac, interim CEO for Borrego Health, wields the scissors during the ceremonial unveiling for the new Coachella Valley Community Health Center in Coachella. / Photo Courtesy of the Desert Sun

Excitement and joy filled each space in the new Coachella Valley Community Health Center in Coachella as Ana Hernandez led a small group of visitors through the clinic.

Prior to the new clinic's opening, Centro Medico Coachella, located on Coachella Valley High School's campus in Thermal, provided a number of services, such as primary care, dental and behavioral health, to patients in the area. Hernandez, the manager of the new Coachella clinic, repeatedly said to guests that if they saw "where we came from to now, you would be in tears." Both centers are operated by Borrego Health.

The nonprofit held a grand opening and ribbon cutting for the new clinic on August 11 to introduce the community to a new swath of resources available to those living in the eastern Coachella Valley.

Borrego Health is a federally qualified health center, which means it receives funds from the federal government to provide primary care services in underserved areas. The two-story building is being leased by Borrego Health, which is subleasing the second floor to other medical offices.

Most insurances are accepted, and a sliding fee scale is available for those who are uninsured or underinsured. Undocumented residents are also welcomed at the clinic.

Since the center opened on July 11, the dental department sees around 20 patients a day, and the medical offices see around 30 patients per day, Hernandez said.

The dental department serves both adults and children. There are six treatment rooms available along with two quiet rooms for extensive work or for those who need more privacy. Services include regular check-ups, cleanings, X-rays, crowns and extractions, and the department can refer patients to a dental specialist if needed.

Hernandez said many patients have appreciated the early opening time, unlike many dentist's offices, because early morning appointments are often the only option they have. There are 10 exam rooms for pediatric and family medicine. Patients can come for sick visits – there is a separate waiting room available for them – annual and sports physicals, telemedicine and vaccinations. For those who need to provide urine samples for testing or other lab services, there is a walk-in lab operated in partnership with LabCorp.

Aside from medical services, Borrego Health patients can connect with a care coordinator specialist who can help with payment or billing issues, applying for health coverage, food stamps and housing resources. More resources are expected to be available to patients in the coming months, pending permit approvals and staff hires, Hernandez said.

She said the pharmacy, located in the main lobby area, is expected to start operating next month. Any Borrego Health patient can pick up prescriptions, often at lower costs compared to other pharmacies. A psychologist and licensed caseworker will provide behavioral health services, and that department will have its own lobby so patients can feel comfortable checking in, Hernandez said. An opening date is not available yet.

Borrego Health offers access to urgent care in multiple locations, and soon it will be available at the new clinic as well. Hernandez said the center is waiting to receive the green light on extended hours as well as increasing staffing and patient volumes before it can move forward. Once operating, the urgent care center will have its own entrance, five treatment bays, which will have curtains up for patient privacy, and five rooms.

The second floor of the Coachella Valley Community Health Center will provide leased space to the Riverside Latino Commission on Drugs & Alcohol, Vision y Compromiso and Cardiovascular Institute of San Diego. Cooking classes are also anticipated on the second floor.

'With love and respect'

As Velasquez welcomed people to the building, she said she never "imagined that we would be standing in such a gorgeous building." To have it located in the east valley and serve many from underserved communities "just means the world," she added.

The clinic will serve as a major benefit to residents who can't easily leave work, find child care or drive far away if they need to go to an appointment, Steven Hernandez said.

"For us, it's important to bring these services to our residents. They can access high quality services in the City of Coachella," he said. "When I think about our residents coming into this building, it's a service that's done with love and respect."

Perez added that providing health care clinics such as this will help raise Riverside County's health places index score, which looks at social conditions such as education and job opportunities, clean air and water and access to health care. The county scored in the 39.3 percentile, trailing Los Angeles, Orange, San Diego and Ventura counties, according to the index's website.

While many areas in the western portion of the Coachella Valley have higher scores, census tracts in Coachella and Indio show less healthy conditions.

"Every single one of you cares, so if we're willing to work together and put politics aside, work on policy and we unite as a front, as a vanguard, for our folks, we'll reach better scores," Perez told community members during the ribbon cutting ceremony. "But we have to believe."

Borrego Sun note: Here they are in person, friends, Trustees, Officers, and politicians tied to Bruce Hebets, and complicit in either ignoring or supporting the criminal and fraudulent acts that have Borrego Health facing censure by the California Department of Health Care Services (DHCS) and suspension of all Medicaid funding.

Corina Velasquez: New Chief Operations Officer, named by other employees as number one ally of Bruce Hebets, architect and founder of the criminal enterprise that is known as Borrego Health.

Supervisor Manuel Perez: Long-time supporter and one-time Government Affairs Officer for Borrego Health. Hired by Hebets after he lost his bid for state Assembly, until his election to Supervisor.