Vagabond-5: Depressed But Not Suicidal 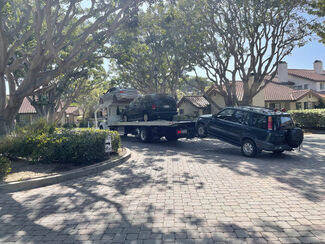 One never knows what complications one is going to encounter on a road trip, from camping reservations...to lack of a WiFi/Hotspot connection...to car trouble. I will focus here on the final complication because it was the cause for an unfortunate end to my Vagabond Tour, immortalized in the photo taken on June 20 of my car being towed away for a $2,500 – $3,000 replacement of a seized engine and sale at auction.

Departing Borrego early-morning on Father's Day, a Sunday, I was excited to be on the road and heading for a lifelong friend's house in Oxnard/Port Hueneme, and later a beach campsite in Ventura. About to pass the Jackson Street/La Quinta exit ramp off I-10, I glanced down at my dashboard and was startled to discover my temperature gauge pegged at the top of the dial.

I barely made it up and over the off-ramp when the engine quit, and I coasted down the hill and into a gas station. I had checked antifreeze and oil levels before my departure, and all was fine. Raising the hood, I could see the engine had overheated, so I would have to wait for it to cool down. "I need some antifreeze," I said to the attendant in the mini-mart. "We don't carry that," he replied.

This was no way to start a road trip! I walked several hundred yards to an open retailer and purchased two gallons, filled up the radiator, and restarted the engine. It started, but it took only a few minutes of idling for the temperature gauge to begin rising to dangerous levels...

The AAA tow truck showed up, and I asked for a tow back home. "Your membership limit is seven miles," said the driver.

I was 60 miles from home. "How much does it cost to tow it to Borrego?" I asked.

"$685 dollars," he said. No way I could afford that, so he found the closest repair shop, in Banning, fortunately only six miles east on I-10. I would have to wait until 8 a.m. Monday morning for the shop to open. I pulled out everything from my car and slept on my air mattress.

At 8 a.m. Monday, the shop was not open, and by 9 a.m., still no one had shown up. I managed to start the engine, testing it at 20 mph back and forth along the frontage road.

It was a short drive to a repair shop I found on the web, and I called and made an appointment for the next day, Tuesday. I arrived at the shop and waited for inspiration. It came when I did a search for a nearby campsite, and found one less than a mile away. But when I got there, the manager was already gone for the day, so I asked folks who were living there permanently if there were any tent sites. They pointed me to an open field, when I drove and parked my car, pulled out my stuff from the back, and ended up trying to sleep not in my tent but rather across the two front seats of my car.

Surly son of a gun, he was. I got really bad vibes as he wouldn't even talk to me before sweeping out his garage and getting ready to open. I got a bad feeling about him. And then a worse feeling in my gut: This was the wrong place to take my car.

I found another repair shop on my iPhone, only a mile away, and I headed there. The manager was friendly and cordial, and we commiserate about my situation. I waited an hour for the mechanic to tell me I had a faulty thermostat in need of replacement. And for "only" $186 dollars!

I left there and continued towards Los Angeles, hopeful this was the end of my troubles. But no-o-o! The temperature gauge started to rise again, slowly, so I kept my speed to 55 mph in the slow lane all the way to Burbank, where I parked outside my sister and brother-in-law's house. They live in the back in what was one time mother-in-law (MiL) quarters.

They were in the middle of an extensive remodel of the MiL house, and the only place I could see for sleeping was in the backyard...but there were people staying in the main house, and they often came out and used the pool. So that was out.

They put me up in a motel for the night, and the next morning I drove my car down,,,very slowly...to a radiator shop. The mechanic had told me he had a full schedule that day, but when he heard my tale of woe, he got right on it. The radiator had two fans, the main one for the engine, the other for the A/C. As bad luck would have it, the main fan was not working. He said I needed a new radiator: $525 dollars.

At 5 p.m., I left for Oxnard, hoping once again my troubles were behind me. I made it to my friend's house without incident, my eyes glued to the temperature gauge the whole way. It seemed okay.

I pulled into a guest parking spot and shut the engine off. I made it! Or so I thought. I was going to move the car into his garage for a couple of nights (the parking Nazi's were always giving grief with cars parked overnight), but when I attempted to start the engine, all I heard was a strong, consistent starter motor trying to get the engine started. It wouldn't. I called AAA once again, and a guy came out but was unable to get the car started.

I decided to put in a call to a guy who knows engines – Fred from the Mirage gas station in Borrego. "Michael," he said, "The damage was done in La Quinta. And then your engine finally seized – the cylinders and pistons overheated and are now warped and frozen in place. The cost of replacing that engine is $2,500 – $3,000 dollars, and the car's only worth three grand. Now you'll be lucky to get $500 dollars for it."

I moved all my stuff from inside and on top of the car, plus my eBike, and I sold the car online to an auction dealer for $385 dollars. I left on Sunday in a U-haul truck, leaving the signed pink slip with my friend and to mail me the check after they towed the car away.

And so ended my Vagabond Tour, me without transportation except for my eBike. I was depressed, but at least not suicidal!

Next time I travel, I think it's gonna be on a cruise to Cabo San Lucas, but San Diego seems like a good place to start anew. So I'm hoping to move there...soon.