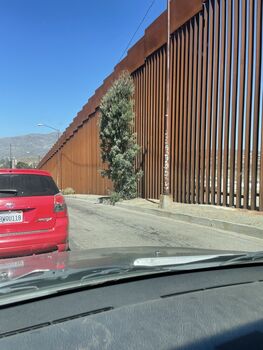 The drought has taken its toll on the water level at Lake Casitas in Ventura County, about a 50-ft. drop.

It was a dark and stormy night at Lake Cuyamaca, mid-afternoon white caps blowing their billowy, frothy tops like little volcanoes across the lake to the southeast, a complete reversal of yesterday's wind, where the view of the unsightly and odiously unnecessary two porta-potties – forest green for guys, muted-tan for the gals - on the far island shoreline that you'd either have to take a boat or swim to get to them, about a quarter-mile as the crow files or a duck paddles (but you, a human being, can't swim in the lake or make body contact with the water); so if you really needed to pee and broke the lake rules and swam anyway, you probably did your business on the way if you didn't drown from, say, exhaustion, much like me right now, wet and freezing and nearly blind on this moonless night waiting for the elusive lake trout to begin nibbling before the early morning rush of fisher-guys and fisher-gals get them first.

Rats. I wanted to write something dramatic to start off, so instead of moaning and groaning about Ensenada – too cold to swim and too windy to stroll down the beach, or sleep comfortably for that matter without a WiFi or Hotspot connection available – the famous first seven words of Edward Bulwer-Lytton's famous opening to one of his novels seemed worth a go. It's used in an annual contest to see which writer can come up with "an atrocious opening sentence to the worst novel ever written." It has to be all in one sentence, interrupted only by commas or semicolons or parentheses, and silly, faux-literate references.

Yes, it's windy here at Lake Cuyamaca, but at least it's sunny and warm, unlike the beach-front campground south of Ensenada. On the plus side, a cup of coffee was a buck and a taco a buck-fifty. The manager and caretaker were very cordial and helpful, with the caretaker making a compressor fitting to blow up my air mattress 'cause it sprung a leak and I had to fix it with the sticky side of a piece of Velcro. Instant leak-stop! It's held for three days. So, remember that if you take an air mattress somewhere – no patching with a funky glue patch or waiting for it to dry.

But alas, because the ocean was cold, never mind the air temp after, there was no swimming nor fish caught, or even attempted. I was beginning to wonder if it'd ever keep my commitment to catch a fish, trout preferably. The worst part was no WiFi coverage, and my Hotspot didn't work, either, so writing on my computer was limited to battery life with no internet research possible.

So I ditched Ensenada after one night and headed north for Lake Cuyamaca, where I knew it would be warm and sunny. But first I had to deflate the air mattress 'cause it was partially blocking my hatch door from closing properly, my eBike on the rack mounted to the spare tire lugs. And sure enough, the nice guys "Penny" and Scott at Cuyamaca were friendly and helpful in filling up my mattress. And the park ranger, Jay, said the lake was fully stocked with 25,000 trout from the State Dept. of Fisheries! Couldn't wait to set up camp and get to it.

Perhaps it was the water current blowing my cork towards me as I cast out again and again that prevented me from landing even a single one of those 25K trout. I was careful to not make illegal water contact with my feet as I stood on the rocks, well, not all that careful, truth be told. I did step out of the water when I heard a low-flying plane approaching, just in case it was the Lake Nazis looking to nail scofflaws dipping their toes in a lake where birds and fish and other critters do much more than that. Not to mention boat motor exhaust with its carcinogenic chemicals.

Two hours later (and only twice did I have to re-bait the line, and the reel never snagged like before), no trout. Heavy sigh. Roasted marshmallows over an open fire that night would have been nice, if only they allowed open fires. There's something about roasting a marshmallow over the blue flame of a Coleman stove that's just not the same experience. A turkey burger in a frying pan, plus honeydew melon for a chaser had to suffice. I was going to cook up some popcorn in a saucepan, but because it was getting dark, and colder, I ditched that idea in favor of getting into my tent and snuggling up nice and warm in my sleeping bag and catching up on the news with my iPhone. They have WiFi here!

Crap, another mass shooting today. When will it ever stop?! Enough with the thoughts and prayers, for cryin' out loud.

Lights out for me.