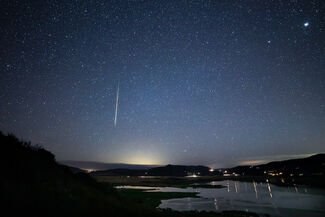 The dark skies around Borrego Springs will ignite with blazing fireballs during the peak of the annual Perseid Meteor Shower, expected between Aug. 11 and 12 this year.

Borrego's dark skies attract hundreds of sky watchers who come each year to witness the celestial spectacular that can often produce as many as 100 to 150 meteors an hour.

This is one of the most prolific annual showers, however, this year will be somewhat diminished by the glow of a full moon that happens about the same time as the Perseid peak.

Meteor showers are produced when the earth passes through celestial dust clouds. The Perseids happen between mid-July until the end of August when the earth is passing through the dust of comet Swift-Tuttle.

The meteor shower peaks when the earth enters the most concentrated portion of the dust clouds.

Meteors, often called shooting stars, are tiny dust particles that ignite when entering the earth's atmosphere at speeds of 45,000 miles per hour about 60 miles above the ground.

While this year might not be one of the best shows, viewers may still see some of the bigger fireballs from dark sky locations. Generally, the best viewing is after midnight when the earth rotates into the dust cloud.

While the internationally recognized dark skies of Anza-Borrego are a big draw for meteor watchers, the searing heat of summer is also a factor to consider.

The attached photo was taken near Lake Henshaw during the 2020 Perseid Meteor shower when there was no conflict from moonlight.

The nice thing about watching meteor showers is nothing is required other than a blanket or comfortable chair. Sit back, gaze skyward and enjoy the show.