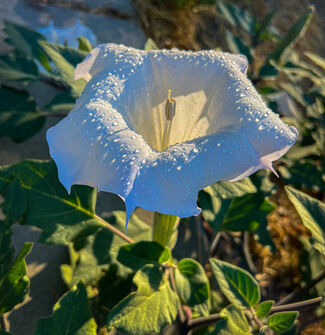 While the night-blooming flowers are large and beautiful, let's make sure that readers know that all parts of the datura plant are poisonous and can be fatal if ingested.

Also known as sacred datura or Jimson weed, this widely scattered native puts on a spectacular show with large and delicately scented, white to purple blossoms.

This poisonous perennial is common to the Southwest, including Anza-Borrego Desert State Park where it grows in sandy or disturbed gravely open areas, especially along graded roadsides and trail edges.

The trumpet-shaped flowers grow to about six inches across and attract hummingbirds, bees, the sphinx moth and various beetle species.

The most toxic portions of the plant are the seeds where toxins are concentrated. Pets and children should be kept away from the seeds, especially. Seeds scatter from a thorny pod that bursts when ripe.

Other names for the flowers include angel's trumpet, and moon lily, because of how the large flower seems to glow on moonlit nights.

Despite risks, the sacred datura has been used by Native Americans, spiritualists, witches and shamans as a pathway into the spirit world. Sadly, recreational drug users have also discovered the plant also causes dangerous reactions including feelings of dissolving, insanity or death.

The toxic reaction of eating datura can happen within minutes with incoherence, loss of control, delirium or grasping for imaginary objects.

Ancient cultures also used the plant made into a paste as an ointment for pain relief for broken bones, toothache or painful wounds.

Datura is a member of the potato family and is a fast-growing plant that can be up to five feet tall and six feet wide.

While datura does make a good deer resistant ground dover, it's a plant that should be enjoyed for its beauty and the role it provides in nature, but contact should be avoided.