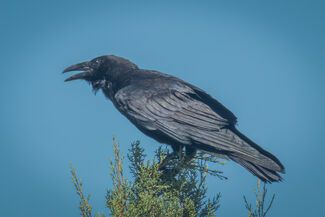 The common raven is one of the world's most widespread wild bird, not to mention being somewhat famous as the subject of Native American folklore, poets, authors, and playwrights.

The common raven is often mistaken with its smaller cousin, the crow, but there are distinctive differences.

First, there is size. Crows are typically about 16 to 20 inches in length, compared to the much larger raven, measuring more than 25 inches. The raven's wingspan can extend to 56 inches, while the crow only spans 32 to 40 inches.

Ravens are scavengers, feeding on the remains of other animals, but also amphibians, reptiles, insects, and small mammals.

Seen in flight, the raven has a wedge-shaped tail and is more solitary that crows that tend to gather in large flocks.

Some Native American groups view the raven as a symbol of the creator of earth, moon, sun, and stars. He is also regarded as mischievous.

In modern literature, the raven has been characterized as a harbinger of death or danger, and a creature of deep wisdom.

With its size and jet-black color, the common raven can't be confused with any other species commonly seen in Anza-Borrego.

Sightings are common throughout Borrego Valley anytime of the year, including a possible nesting site in Hawk Canyon.