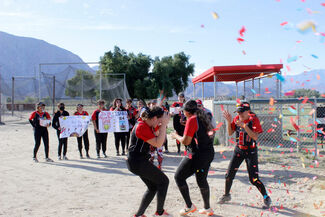 It was quite the celebration for Borrego Springs' Lady Rams softball on May 10, as the team honored its three seniors and a 24 – 6 mercy rule win over Julian in the last home game of the regular season.

The team also faced West Shores in its last game of the season and won 25 – 3.

The Lady Rams softball finished its regular season 10 – 5 and undefeated, 4 – 0 in the Manzanita League standings.

The Lady Rams softball team finished its regular season 10 – 5, and undefeated 4 – 0 in the Manzanita League standings.

The team also made it into the playoffs, facing Bonsall in an away game in the first round on May 17. The Lady Rams won, 18 – 13.

The team faced Bonsall in their first game of the season and also won that game.

However, the team still had a chance to move on in the playoffs. They were set to play Mt. Miguel on May 21. But due to previous commitments and other circumstances, the team decided to forfeit, ending their season.

After a walk and an easy out at first base, the Lady Eagles managed to connect with a ball for a liner, putting them on the board, 2 – 0. That was all they could get out of Elena Sanchez in the top of the first inning.

It was time for the Lady Rams offense to create some damage and get on the board.

After back-to-back walks to the top of the lineup, leadoff hitter senior centerfielder Angelina Sanchez and her speed managed to come home getting the Lady Rams on board, 2 – 1. Sophomore third baseman Miriam Hernandez tied the game, 2 – 2 with an RBI single.

Julian's pitcher had a bit of trouble commanding the ball, and the Lady Rams took advantage of it, being patient at the plate to work the walks, bringing in runs, extending the lead.

It was back to the top of the lineup, and Angelina Sanchez wanted to have an inside-the-park home run of her own, and added to the lead, 9 – 2.

The walks continued and the Lady Rams led, 11 –2, forcing outs to end the first inning.

The Lady Eagles also managed to be patient at the plate and work walks against Elena Sanchez, who was still hitting the spots she needed to. After consecutive walks, a few changes were made.

Del Bono took the mound, while Angelina Sanchez was brought in from center to catch for her. The Lady Rams managed to get the final two outs, catching the runners attempting to steal home, and the score was now 11 –6.

The Lady Rams continued right where they left off in the bottom of the second inning.

Walks continued for the Lady Rams, as juniors Shantell Fuentes and Hannah Strate were on base to begin. Fuentes managed to find her way around the bases to get home, 12 – 6.

A single by Angelina Sanchez and senior second baseman Isabel Arteaga, who also managed to work a walk, loaded the bases.

Hernandez hit a double to bring in a run, while Angelina Sanchez came home, and Del Bono hit a triple as the lead extended.

As it was walk-after-walk and runners stepping on home, the lead was now 21 –6.

As bases continued to be filled with Lady Rams, a slight mishap in the infield had dust flying everywhere, constant yelling and runners heading for home. The team was now up, 24 – 6, after again, forcing outs.

Del Bono was back on the mound and worked a 1-2-3 via strikeout. The Lady Rams also went down in order in the third inning. Del Bono only faced four batters in the top of the fourth, working through it easy, despite one hit batter.

With a 24 –6 lead, the mercy rule was in tact, sealing the Lady Rams victory.

It was stellar patience at the plate and good base running, and solid pitching by Elena Sanchez and Del Bono that led the Lady Rams to another win on the season.

After the win, the team's three seniors were honored – Angelina Sanchez, Isabel Arteaga and Brianna Del Bono. The celebration was filled with confetti poppers, silly string, handmade signs and gifts, it was smiles all around.