Vagabond: The Short and Dusty Road 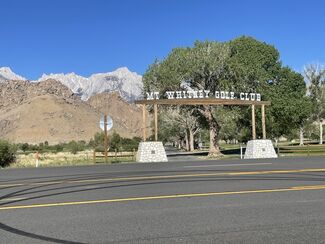 I headed out of Borrego mid-morning on Mother's Day, right into a blinding dust storm east of the airport. If the wind had been any stronger, it would have flipped the left-curve arrow 180-degrees and propelled me along the short dirt road, probably all the way to the dump.

As luck would have it, the wind was along the San Jacinto Fault Line in a direct line to Coyote Creek, so when I got heading towards the Clark Dry Lake bed, I was out of it. The dust part, that is. When I reached Highway 86, there were 40-to-50 mph headwinds all the way through Palm Springs, Riverside, and then up to the 395 cutoff from I-10. The wind was then coming in from the west at 90-degrees to the highway, all the way to Owens Valley. Horrible gas mileage, and the highest prices in like, well, ever.

But what a view of the Eastern Sierra Madres! Found a campsite mid-afternoon in the shadow of Mt. Whitney – Lake Diaz – run by Inyo County. Nice 100-acre lake, campsites for tents and RV's, picnic tables, fire pit, water and bathroom nearby. All for $14 a night.

Actually, I only paid $10 for the first night, which the ranger explained to me the next morning was the option on the registration device, for boats. My bad. I offered to pay for it with the second night's fee, but since I needed two bundles of firewood at $14, had $30 cash in my wallet, and he didn't have change for $20, we settled at $30.

I off-loaded my e-bike and set up my Coleman stove and paraphernalia. Had to position the car so it served as a block against those stiff westerly winds over the Sierras, but it was doable.

Started to make a cup of coffee in my three-cup percolator, took in the surroundings, and when I went to check on the coffee, I stumbled slightly, steadied myself on the Coleman wind screen, and promptly knocked over the coffee pot. Started all over, because that's what vagabonds gotta do.

The campfire was a true comfort. Not a roaring one, but rather a steadily building cone of flame. As the sun set over the Sierra's, the combination of peace & quiet, a bowl of tortilla soup, and the late afternoon wind blowing in all its glory made for a feeling I hadn't had in a long, long time: Time for myself out in the wilderness, sort of.

And then it was time for bed. If Borrego Midnight is 9 p.m., then Diaz Midnight was 8 p.m. when the sun set. Crawled into the back of my Honda CRV, tucked myself in, caught up on the news, and fell asleep, knowing that first thing in the morning I was going to go fishing. For trout!

Breakfast was scrambled eggs and bacon, with watermelon chunks serving as a critical food group. And coffee that didn't spill this time.

I suspected I'd have to ride around the entire lake before finding a suitable fishing spot, so I packed up my rod and tackle and folding chair, and headed off on my e-bike, only to stop less than a hundred yards away. Marsh reeds up to the shoreline, birds chirping and flying hither and yon. Hey, perfect spot!

And then I spent what only seemed like an eternity tying my weight and fish hook onto the line. That line was so thin it reminded me of what they call in surgical circles "4-oh silk." Re-e-ealy thin stuff there, and while I was used to suturing in my Navy Corpsman days, I at least had a pair of hemostats back then to grab one end and tie a knot. But I couldn't feel the filament between my fingers, and I kept fumbling the knot.

When I finally did pull off full rigging, I was exhausted! But I cast the weighted and baited line at least 50 feet out into the lake, reeled it slowly back in, and repeated that three more times, the last one close to the reeds.

I reeled in, and the bait was gone. Trout bait, mind you, some orange gunk that can be molded and compressed into shape on a fish hook. I cast again, same spot. Same result, too, She was toying with me. So I toyed back. Reeled in, reset the bait, and cast out again.

Waiting...waiting...nibblebibblenibble...the line then went slack. I reeled in and she had cut the line above the hook, so I lost the bait and hook and sinker. This was getting serious.

Again with the fumbling to get the sinker, hook, and bait in place, but I persevered. I cast out once more, knowing she was there, waiting for another course. And she took it...the bait, the hook, and the sinker.

That was my last hook and sinker set, me thinking at the time of purchase I couldn't possibly use up more than two sets.

I then got to wondering about the calming effect of a marshmallow roasting over an open fire that evening.