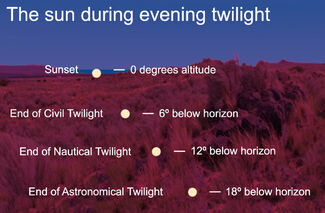 Several practical definitions of "twilight" have evolved over the years.

If you find yourself occasionally checking around for times of sunset, it might never have occurred to you to ask the question: "Just what is sunset, anyway?"

Seems like a ridiculous question; everyone knows what sunset is, right? But you might be surprised to learn that the words "sunset" (and "sunrise") can be defined in several ways.

Those at the U.S. Naval Observatory (USNO), in charge of calculating such celestial matters for astronomers and seafarers, defines "sunset" and "sunrise" as the times when the upper edge of the sun's disk appears on an unobstructed horizon. An exact time for this is tough to know because it depends on atmospheric conditions, your elevation, the terrain over which you're viewing and more. It's just before this moment that the famous "green flash" can appear, but we can see this only if we're in the right place at the right time.

And what about "twilight"? What exactly does that mean? Most of us think of twilight as the period between sunset and darkness (or darkness and sunrise) where sky brightness decreases (or increases), and that's true. But, as you might imagine, several practical definitions have evolved over the years.

"Nautical twilight" is defined to end in the evening (or begin in the morning) when the center of the sun lies 12 degrees below the horizon. At the end or beginning of nautical twilight, under good atmospheric conditions and in the absence of other illumination, general outlines of ground objects may be distinguishable but detailed outdoor activity is not possible. The horizon – especially at sea – is indistinct, hence the term "nautical" twilight. At this time the sky takes on a deep blue color, and the first stars are beginning to appear.

Of course, we can't see the sun below our horizon, but we can calculate these numbers and determine just when various twilights officially end (or begin). Check out timeanddate.com/sun/, type in your city name, and you'll find all the times!