Celebrate Our Nation's Birthday in Julian 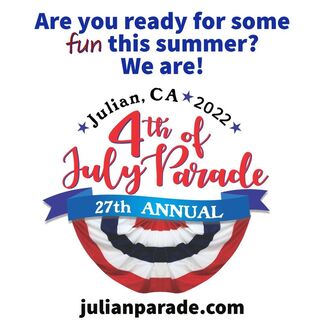 This year, Julian salutes July Fourth with the Theme, "Back in Bloom." Julian honors our nation's birthday with a salute to the men and women who made our country great, both domestically and militarily. The parade goes down Downtown Main Street from Julian High School to Frank Lane Park, lasting about one hour.

For more than 20 years, Julian residents, their friends and parade lovers from all over have lined up at on the town's main street to wave their flags, cheer the marching bands, salute the Marine Color Guard, and carry a giant American Flag down the thoroughfare. Bands include:

Merchant of the Year for 2022 is: Julian Tea House;

Other dignitaries include: Veterans from the American Legion; Mr. and Mrs. Apple Days 2022: (to be determined); and Miss Julian and her court. Antique cars, vintage tractors, belly dancers, World War 2 Submariners, and several comedy entries will appear to complete a fun well rounded hometown parade.

Here is a tentative schedule of the day's events:

10 a.m. – Pre-parade activities begin with a fly-over of 4 Stearman Bi-Planes used in WW2 to train pilots. Patriotic music will be played at three different stages along the route. Followed by live entertainment on the main stage and many fun activities.

10:30 a.m. – Pre-Parade will have it's first Pie Eating Contest. Participants will be invited to sign-up at main stage and six will be chosen.

Spend the day enjoying the parade and the events that surround it:

The historic quilt show put on by the Julian Women's Club as well as a raffle for a one of a kind quilt designed by the queen of quilt making, Eleanor Burns.

The merchants will be open after the parade in order for some great shopping, eating and buggy rides.

Things to know: The Julian parade is quite popular so it is suggested that you arrive early to catch the pre-parade activities starting at 10 a.m. Some parade "goers" set out chairs the night before to enable them to get a good place.

Main Street closes to traffic at 9 a.m. Follow directions to the nearest parking lot. FREE Public toilets are available at the bank parking lot and behind the town hall.

Every year, they have annually designed, cotton, commemorative 4th of July t-shirts on sale. Look for the three locations along the parade route and at select vendors in town. 100% of ALL proceeds go toward next year's parade!

Sample expenses every year are:

The parade is supported by 100% donations, and are a recognized 501(c)(4). Without your generous support, they would not be able to do what they do. All donations over $100 get recognized in the program handed out on July 4th.

Donation are welcome anytime. You can donate online: https://julianparade.com/annual-auction/ or mail to: