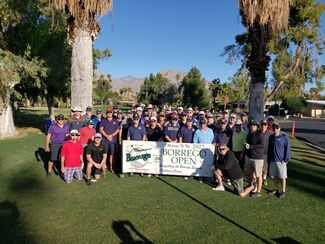 Forty-four golfers, including their families, came from the Southland and from as far away as Florida to participate in the 56th Annual Borrego Open, a two-day event played on April 23 and April 24 at the RoadRunner Club's 18-hole, Par-3 course, raising nearly $7,000 for the Children's Center while meeting up with old friends and having a wail of a good time.

First played in 1967 by four golfers (Joe Twilliger, Ron Gerson, John Peterson, and "Thunder" Winchester), who camped out at the State Park in 1967 and played the old 9-hole course at the Springs Resort, only Joe Twilliger, now 85 years old, is left among the originals for this annual get-together.

"It's not about the golf," says the back of the official golf cap and Alex Bain, long-time participant and one of the event organizers, "it's about raising money for the kids," plus getting together with family and rekindling far-flung friendships.

Golf, two dinner banquets, and an awards/raffle finale (which made for a boisterously civil event), was pretty much like they've done for decades.

Kudos to the players and families who know how and where to have a good time while raising money for the kids of Borrego Springs.