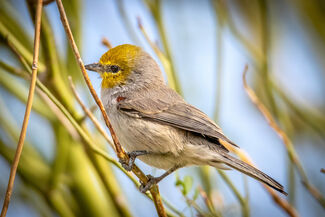 If Borrego Spring ever picks a town bird, the tiny verdin might be on the short list for consideration.

The little gray bird with a yellow head is a permanent resident desert dweller found just about anywhere there are spiny shrubs or trees that they also use for nesting and roosting.

The verdin is an active creature, bouncing around in the native vegetation searching for food which includes a menu of insects, caterpillars, spiders, aphids, wasps, and beetles.

In the summer, the verdin will feed on native berries, nectar, palm fruit and other available plant food.

The breeding range of the Verdin in San Diego County is largely a footprint of the Anza-Borrego Desert.

Within that range, they nest in a variety of spiny plants such as smoke trees, catclaw, ironwood, mesquite, and cholla cactus.

Nests are enclosed and globular in shape with an entrance on the side. Unlike many species that only use the nest during the breeding cycle, the verdin builds and maintains several other smaller nests that are used throughout the year as a roosting site. This is likely to offer shelter from the harsh desert elements.

Despite being one of the smallest American songbirds, it has a huge and persistent voice that is much larger than you would expect for such a tiny bird.

Their most common, tseet, tseet call is often repeated for some time then interrupted with a pause of several seconds.

The verdin is rarely seen on the ground, preferring to bounce around in the foliage as they search for food.

You may often see a verdin in the desert, but generally only a single bird. Occasionally they will forage in pairs, but more often can be seen feeding in small groups with black-tailed gnatcatchers.

In winter months, they may visit nectar feeders, so it's a good idea to use oriole feeders since they have slightly larger feeding holes.