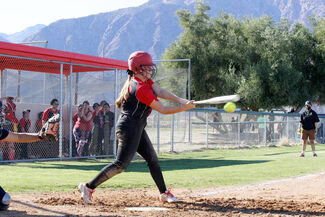 Senior pitcher Brianna Del Bono hits a single in the bottom of the second inning.

Despite a big win on their season and home opener, the Lady Rams softball team have been hit with a slump, dropping the last four games.

The team hoped to defeat Calipatria this time on their home turf, but the Lady Hornets proved their dominance, taking the mercy rule win on March 22.

The team also faced Palo Verde Valley at home, where they lost 25 – 0.

The Lady Hornets built their lead early in the game, and it was too much to comeback from. They have been dominating their league, and surely showed it, outscoring their opponents 143 – 15 in their last seven games.

It was a rough first inning for the Lady Rams, as the Lady Hornets continued to connect with the ball and made their way around the bases, as the first five batters were able to get on base.

However, senior pitcher Brianna Del Bono did not let that get to her, and managed to strikeout the next, only allowing a single, then proceeded to strike out the last two to prevent further damage, 4 – 0.

Calipatria picked up right where they left off and continued to add to their lead, taking advantage of miscues and catches. And were up, 8 – 0.

In the bottom of the second, Del Bono got the first hit for the Lady Rams with a single.

Sophomore first baseman Mariana Torres and junior catcher Kaleigh Asche followed her lead, having some base knocks for themselves.

As swift as Del Bono is with her arm, she is with her base running; managing to get to home plate for the first run of the game, 8 – 1.

After a bloop knock by Asche, Torres found her way to home plate, as well to add to the score for the Lady Rams, 8 – 2.

Asche then managed to work her way home, after a swinging strikeout by the following batter, 8 – 3.

As the Lady Rams managed to cut their deficit, the Lady Hornets continued to add to the board in the third and fourth innings, preventing any sort of comeback, and were up, 12 – 3.

The Lady Rams managed to get two more runs in the fourth inning.

With bases loaded, senior centerfielder Angelina Sanchez found the right pitch for her, as she earned herself an RBI-single, 15 –4.

Senior second baseman Isabel Arteaga followed with an RBI-single of her own, 15 – 5.

The Lady Rams have a chance to break their losing streak, as they fix minor errors on their part.

The team has two away games against neighboring rivals Warner Springs and Julian on April 5 and April 7, respectively.

They will then return home on April 12 to face the West Shores Wildcats at 3:15 p.m.