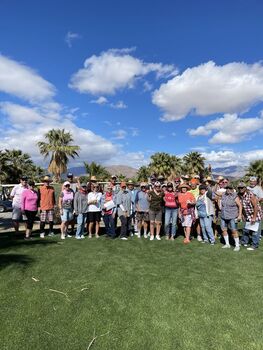 Golf is supposed to be a challenge to the brain and body. Practice, practice, practice! But how does one practice that which has never been even remotely contemplated?! Such as sitting uncomfortably in a very wobbly desk chair where not all the legs reached the ground, in the middle of a Par-5 fairway wearing a ridiculous redneck outfit purchased at Frugal Coyote, wearing mis-matched shoes (but at least I had another pair at home just like 'em), and then trying to accurately swing a driver like a baseball bat with only faint hope of hitting a straight shot towards the pin!

That was but one of the comical challenges at the Red Neck Open, a unique annual tournament if there ever was one. Held on The Springs at Borrego Golf Course on March 4 and hosted by teaching pro Brandy Casey, the afternoon 9-hole tourney brough out 30 of Borrego's, uh, finest golfers? Well, those with a sense of humor, anyway.

The course included different challenges to one's golf game, such as having to putt with a broom handle, or navigating around and between a rash of orange cones that obstructed the pin on a putting green. My team figured out that last one by using to great effect the notion of one "free toss" granted to each player. It's actually an extension of one's previous shot, for example for use out of an errant shot into a bunker, and it doesn't count as a stroke. We used them to score three birdies instead of pars leading up to the 4th hole.

In the best-ball Scramble format, we were laying a little over 100 yards out on the 4th hole for our second shots. John Peterson was last to hit, and somewhat miraculously he landed one on the green 10 feet from the pin. When we saw up close that he actually had a straight shot to the cup between the cones, it was decided to use John's one and only free toss, the team's last one. He aimed the ball like a dart, tossed it on the green, it rolled up to the pin, and PLINK into the cup! Because of the free toss, he was awarded an eagle because it was a continuation of his second shot. It put us 5-under for the round, and you'd have thought we won the Ryder Cup by all the whoopin' and hollerin' like the red necks we pretended to be.

Brandy awarded silly prizes at the end of the match, and my team came in second. But this game wasn't about placement, it was about fun. And 30 golfers dressed in crazy attire had some crazy fun out there.