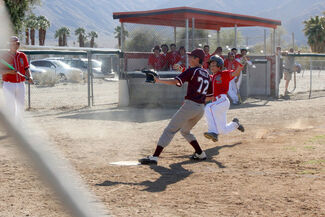 The Borrego Springs baseball team was finally back in action after nearly two years without hitting the field.

At the helm of new head coach Andy Macuga, the team opened its 2022 season with two away games against Vincent Memorial and Bonsall. The team dropped both games, 17 – 2 and 17 – 7, respectively. They then opened at home on March 22, taking on Calipatria, falling 29 – 5.

The Rams had a chance to redeem themselves, as they faced rivals, the Julian Eagles on March 24.

Both teams were neck and neck, keeping the game close, exchanging leads, but the Julian Eagles took advantage of miscues made by the Rams to break the game open.

The Eagles managed to take a 9 – 5 lead in the top of the fifth inning, and never looked back. Despite their hot bats, the Eagles infield prevented the Rams from scoring any runs, as they dropped the game, 20 – 7.

After a hit batter to begin the first inning and back-to-back outs, a swinging strike that should have been an out at first brought the runner on base home due to an error.

Senior pitcher Daniel Arias managed to induce an out, limiting damage. The Rams answered right back in the bottom of the inning.

With senior first baseman Cesar Ochoa working a walk, Arias brought him home on an RBI-double, 1 – 1.

Freshman Abraham Arambula had himself an RBI single, as the Rams took a 2 – 1 lead.

The Eagles answered back and retook the lead, 3 – 2.

Despite a 1-2-3 second inning, Rams going down in order, Arias managed to do the same to the Eagles in the top of the third.

With a strikeout and a walk, the Rams worked a 6-4-3 double play, a pitcher's best friend.

In the bottom of the third, Ochoa worked himself a double and Arias once again connected with the bat for an RBI single.

Both teams then went back-and-forth for the lead, but the Rams continued to hang out with a 6 – 5 lead after sophomore second baseman and replacement catcher Adrian Marin stole home.

In the top of the fifth inning, with a fresh new arm in Ochoa thanks to a pitching change for the Rams, the Eagles took advantage of it and started to add to their side of the scoreboard.

A bases clearing inside the park homerun by the Eagles extended their lead.

The Eagles then continued to add runs in the sixth inning after another pitching change to Arambula.

The Rams managed to add two more runs with back-to-back RBI singles by Marin and freshman centerfielder Danny Torres, but they were still down.

The Eagles again added more in the seventh, and the Rams all went down looking in order, to end the game, 20 – 7

Even with the scoreboard not reflecting the way that many would want it to be, it doesn't show how hard the team has worked. The bats were hot and pitching as solid as it could be, this Rams team is an enthusiastic and hardworking bunch.

With not being on the field in a couple years, there are still some things to be worked on. And at the helm of Macuga, the team has a bright future ahead.

The team is back in action on April 5 and April 7 at home to face Gompers Prep Academy and Bonsall once again. The Rams then hope to avenge their loss to the Eagles when they meet the team again on April 14 in their first Manzanita League game of the season. The game begins at 3 p.m.