Who Let the Dogs Out?! 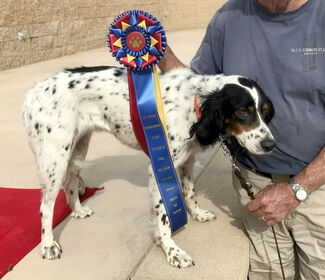 The competition was fierce, the 19 sponsors very generous, the ribbons bright and colorful, and the raffle items highly desirable as about four-dozen dogs and their owners gathered for the First RoadRunner Club/Springs RV Park Dog Show on March 19 at the Dreamweaver Amphitheater. Dan Wright (Springs at Borrego RV Park and Golf Resort sponsored the venue) was on hand to provide beer and wine, and there were hot dogs and chips, too, all at very reasonable prices (considering the price of gas these days). Oh, and lots of "dog-themed" songs playing on occasion.

To avoid any hint of judging favoritism, no dogs from the RoadRunner Club were allowed to enter. And of course, any and all potential legal entanglements were assuaged by owners signing "Hold Harmless Waivers." Dogs were always on a leash and apparently on their best behaviors – no incidents occurred.

Serving as emcee for the all-day event, Susan Dent's enthusiasm never waned as she presented category entrants on the stage (she wrangled them one at a time to avoid brawls), awarded ribbons, passed out raffle prizes, and presented Sandra with a gift basket and flowers for her fine organizing efforts. It was a very well organized event, and yet both Sandra and Susan are thinking next year – ways to speed up the process and avoid long delays between categories.

The categories and top prize winners were:

The top-5 in Best in Show were Emma (Cutest), Carter (Scruffiest); Tommy (Waggiest Tail), Haley (Best Markings), and Dolly (Floppiest ears). Finishing in 3rd Place was Emma, 2nd Place went to Tommy, and the top award, Best in Show, went to Haley! She also won Best Markings, and for Best in Show she received a special gift box worth at least $200 from Janna at "Kahoots" in Ramona that included a large biscuit holder, blanket, and an assortment of doggie treats and toys.

So, it was Sandra and Susan who were more than happy to let the dogs out, and we're all happy they did. Both of them will be back next year!