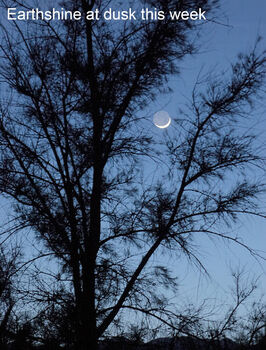 It's amazing how the sky can be such a great memory trigger.

I remember as a child racing home from school each day to watch "Superman" on television as the comforting aroma of my Mom's cooking would waft through the house. It was such fun to learn how this "visitor from another planet" would save our world each night.

But it was the ending credits that always gave me the greatest thrill. With proud and majestic music, images of planets and moons appeared behind the words, all in various crescent phases. They looked so real and mysterious and exciting at a time when travel to other worlds was merely a dream.

After the show, I'd often throw on a coat and run out to the backyard to watch the stars come out. Sometimes I'd be surprised by a wonderful crescent moon hanging beautifully above the colorful sunset. It always appeared so delicate, so exquisite, and three-dimensional.

Seeing this magical sight made me feel that all was OK, much like the ending credits after Superman saved the world. But this – this was the real thing!

During this upcoming week, we will see the crescent moon put on a show much like this, just as it does each month. By Monday we'll easily see the moon appearing shortly after sunset – a delicate crescent hovering over the western horizon at dusk.

As darkness begins to fall early this week, look carefully at the moon and you will see not only a sunlit crescent but the ghostly image of its full disk. And if you want a stunning 3-D experience, check it out with binoculars or even a small telescope.

Why the moon's "dark side" becomes visible at these times was first explained by the famous 15th century Italian artist and inventor Leonardo da Vinci.

He recognized that when the moon appears as a crescent in our sky, a hypothetical lunar astronomer would see in his sky a nearly full Earth. And, just as a bright moon illuminates the dark night on Earth, a bright Earth would illuminate the darkness of the moon. Today we know this phenomenon as the moon's ashen glow or, more poetically, as the old moon in the new moon's arms. Most of us, however, call it "earthshine."

Backyard stargazers can also monitor its changes from month to month. Simply note how many lunar features you can see because of it, how the brightness of twilight, sky transparency and the moon's altitude affect its appearance, and how its brightness changes with the amount of cloud cover you see on satellite weather photos of our Earth.

Be sure to get out to see the earthshine before the moon becomes too bright by the middle of the week. If you should miss it, don't worry; it'll appear like this again next month. And I can guarantee that I'll also be out enjoying this most beautiful of moons, as I relive some of my most wonderful and magical memories of childhood.