Rams Golfers Pull to 1 – 1 in Standings 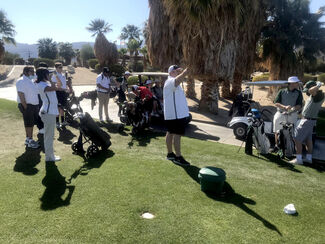 While they have previously played only a single match with a fellow Citrus league team, the Borrego High Rams, playing 9 holes at the Springs at Borrego golf course, were awarded a non-league win by forfeit over the Holtville Vikings. Only four Holtville players showed up, one short of posting a team score. This win brought the Rams' standings in CIF Division 3 to 1 – 1. Said Coach Tim White tongue-in-cheek, "A win is a win is a win, we'll take it!"

King ended up shooting a 48, despite not having picked up a club in months due to his work schedule.

On the first hole, he powered his tee shot well down the center of the fairway, caught a greenside bunker, then missed long out of the trap and ended up with a bogey. However, he easily parred the next hole, a par-5. His experience, focus, and a smooth, professional swing makes him player to watch going forward, because he has previously played well in CIF matches, including a win here at Rams Hill.

While our golfing Rams are low on the overall CIF rankings list, Coach Tim White offers this goal for student golfers, "We aspire to produce graduates who have their own visions for the future, armed with strong values and the tools for success in college, career, family and community life."