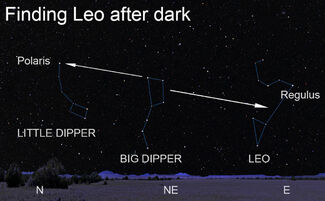 It really doesn't matter the images we conjure up; the point is that the sky is a marvelous canvas for us to enjoy.

I've been fortunate to spend more than three decades working in some of our nation's great planetariums and, as springtime approaches each year, I always think back to elementary school and those wonderful field trips to Philadelphia's Fels Planetarium.

These introduced me to a universe I never would have experienced from behind those rickety old wooden desks at Centennial Elementary School in Easton, Pennsylvania, and inspired my lifelong passion and career.

One of my favorite memories under the planetarium dome is learning how to find my way around the heavens by using the stars of the Big Dipper. You might recall from last week's article that the Big Dipper, one of the most easily recognized star groupings in the Northern Hemisphere sky, now appears to be balancing on its "handle" in the northeastern sky after dark. "Simply connect its seven stars with imaginary lines", the planetarium lecturer explained, "and you'll see a bowl and a long bent handle." This was especially fun for me since my favorite game at the time was "Connect the Dots."

I couldn't wait for darkness to fall so I could check it out myself. I remember racing outdoors after dinner that night to connect the Dipper's "dots" in the real sky and, sure enough, there it was, just like the astronomer said!

He explained that the Dipper's two stars farthest from the handle were called the "pointer stars" because they pointed toward Polaris, the north star, which marked the end of the handle of the Little Dipper.He also suggested that if we could fill the Big Dipper's bowl with water and poke a hole in its base, the water would drip onto the back of Leo, the lion.

But how would I know Leo when I found it? By the backward question mark that forms the lion's head, with the bright star Regulus at its base. He even connected those "dots" to show how, with a lot of imagination, one might trace a rough outline of a lion. The backward question mark forms its head, and the triangle of stars on the other end forms its, well, other end.

"This is too cool!" I thought. But wait a minute. It seemed to me that if I reversed the picture, it was actually easier to see a mouse. That backward question mark now traced the mouse's long, curving tail, and the triangle formed his head and pointy nose!

As I learned, it really doesn't matter the images we conjure up; the point is that the sky is a marvelous canvas for us to enjoy. It's remarkable how seemingly unimportant events can ignite a child's imagination and, sometimes, even lead to a lifetime passion. In fact, much of what I discovered under that magical planetarium dome six decades ago I continue to pass on to others who gaze skyward – both in this column and under the starry night sky.

So if you've got any children around, be sure to introduce them to the stars. Whether or not they seem interested, you'll be exposing them to one of nature's great experiences. And you just never know what lifelong passions you might ignite!