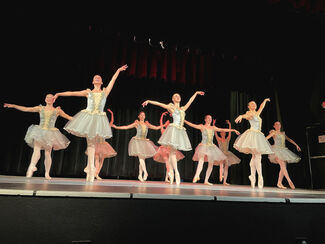 The City Ballet of San Diego brought 13 of their dance artists to Borrego's Performing Arts Center on Feb. 18, and the nearly full house of patrons greatly appreciated the artistry, athleticism, and choreography of a wide variety of dance vignettes. Different rhythms and tempos were used to wow the audience. And unlike previous performances during the COVID pandemic, we got to see their faces because they performed without masks.

Dance Mistress Natalie Test introduced the audience first to "Princesses from the Enchanted Kingdom" by composer Antonin Dvorak and choreography by Brian Heil. The female dancers showed off their fluid and artistic talents both as a group and in on-point solos.

Next up were "The Clowns" by Igor Stravinsky, where two males and a female used comedic awkwardness to great effect. Many of the brief "poses" were reminiscent of Elizabethan-era "tableaux", a popular form of staged entertainment back then.

After intermission, the audience was treated to theatrical antics of Joseph Haydn's "Surprise Symphony." He was disturbed when he noticed that many in the audience were falling asleep during performances, so he livened things up with soft music and subtle movements and lifts broken up by sudden blasts of energy, such as a dancer falling to the ground with a loud musical thump. Not surprisingly, no one in our audience fell asleep, so, mission accomplished.

Cartwheels and more tableau-esque posing marked Aaron Copland's "Shaker Variation" in a spring celebration of pioneers reveling around a newly-built farmhouse. And Copland's "Hoedown" provided lots of energy for the dancing cowgirls and cowboys, replete with western costumes with cowboy hats and boots.

In the "Eugene Onegin Waltz," music by Tchaikovsky, dancers re-lived a time when the waltz was the first dance in history where men and women were partners.

Near-perfect synchronization of spins and twists and lifts were amazing in "Slovanic Dance," another piece by Anton Dvorak, where a folk music melody from Czechoslovakia offered a dance presentation that spanned the light fantastic to resounding music with active stage movement and energy.

In all, there was much to be appreciated in this performance, and we're fortunate to have City Ballet return year after year to show off their artistry.