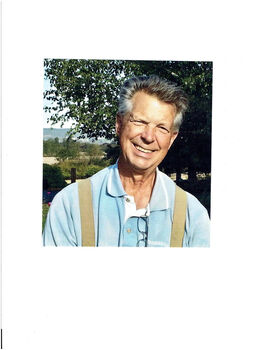 Losing a close friend is never easy, especially when they had a major influence on my life and the lives of many others.

Such was my friend Larry Talbert. He lost his battle with cancer on Dec. 20, 2021. He will be greatly missed for his sense of generosity, humor and warm spirit by those who knew and loved him.

Larry was born December 27,1942 in Fullerton, California to Ernest W. Talbert and Nona M. The family eventually relocated to Haines, Alaska, a place Larry always felt was home. Larry often said that he was born in Fullerton, but then he moved his parents to Juneau. Larry's sister Wanona said: "That was the beginning of our life in the wonderland of Alaska and the beginning of the many friends in his life that became the Senior Brothers."

After high school, Larry graduated from Oregon State University in Corvallis, Oregon. He played basketball and was also on the Crew Team. The crew team he was on is still held in high esteem by the University for beating the #1 ranked University of Washington Huskies in the Pacific Northwest annual tournament in 1965 or 1966. Larry had a chance to row with a current crew team member a few years ago, something he was extremely proud to do. Subsequent to military service, marriage, the birth of two children and a few career changes, retirement brought Larry and then wife Sandy to Borrego Springs.

Life in Borrego Springs is not without its challenges. Along with its natural beauty and diversity, it is also short on some common amenities that new residents are accustomed to. If you ask how their Internet access is you could get a wide variety of answers from okay to terrible. Many may not know that prior to 2000, the population most impacted by poor Internet service was the Borrego Springs Unified School District. Under the direction of Superintendent Shanda Hahn, local resident Larry Talbert was hired to upgrade the school's technology infrastructure and access to the World Wide Web.

Larry was brought on due to his previous experience as a regional Director for the Major Technology Firm CH2MHill.

Together, Hahn and Talbert were able to leverage Federal E-Rate Funding along with the "Last Mile" Grant that provided schools access to Fiber Optic connection to the San Diego County Office of Education. This enabled high school students to access previously unavailable Advanced Placement Courses providing them with college credits and preparation for early placement with Grossmont Community College and others that had articulations with the district. Following years brought a prestigious Teaching American History Professional Distance Education Grant to the school district. This was a first of its kind and was a source of pride for the national director in Washington DC.

In addition to these major achievements, Larry started a Computer Intern Program for students who might be considered at risk or disenchanted with the traditional education experience. I had the esteemed privilege of being a part of that program as the program facilitator along with Larry. Several students who graduated the program have gone on to excel in the IT Industry and other career pathways due in large part to the skills and values that they gained under Larry's guidance.

Notable is a former student who is now an engineer at Google. When I left the district in 2013, the role of supervisor of technology for the school district was awarded to a graduate of the Computer Intern program. Proof of concept for the programs' worth. Larry shared a deep sense of pride as a measure of the program's success. For me, what started as an employer/employee relationship turned into a lifelong friendship.

After his second retirement, Larry continued to contribute to the community through his involvement with the Rotary Club and a supporter of a cancer recovery group. As a three-time survivor of cancer, he became a source of comfort for those who were undergoing treatment, recovery and managing the effects of chemo and radiation therapy. In addition, he provided technology services for locals and businesses.

After leaving Borrego for the last time, he traveled to his hometown of Haines, Alaska a place he dearly loved and spent time with his sister, friends and school buddies in Alaska, Washington and Oregon.

In 2016 Larry moved to Sutherland, Oregon where he spent his last few months with his sister Wanona Brand. He was attended to by the Veterans Administration Hospice until his passing. Larry is survived by sister Wanona Brand, former wife Sandy Talbert, son Brock and daughter Heather.